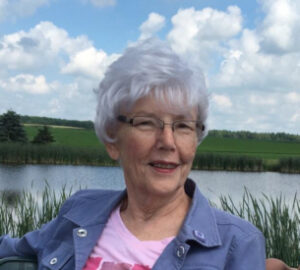 Sharon C. Satorius, 77, passed away in her home with family by her side at 11:00 a.m. on Saturday, April 15, 2017. She was such a tough woman through her cancer fight, as was her personality for everything.
Sharon was born in Marshfield, Wisconsin on August 6, 1939 to Elmer J. and Alma G. (Haroldson) Seehafer. She graduated from Marshfield High School with the class of 1957.
On August 28, 1965 in Marshfield, Wisconsin, Sharon married William Satorius. The couple would make Plymouth their home in 1970.
She worked in the circuit court and auditor office as a deputy clerk for 20 years before her retirement in 2001.
Sharon was an active member of Calvary Lutheran Church and served as Treasurer of the Womenâ€™s Guild. Maga loved spoiling her grandkids. She loved to spend time with her friends playing bridge, golf and yelling at the Green Bay Packers.
She is survived by her husband, William Satorius of Plymouth, and their two children: Kari D. Satorius of Texas and Douglas A. (Melinda) Satorius of Plymouth; grandchildren: Anna M. Satorius, Nicole R. Satorius and Nicholas A. Satorius; and her siblings: Elmer J. (Anita) Seehafer of Marshfield, WI, Shirley (Carl) Satorius of Marshfield, WI, Douglas (Julie) Seehafer of Marshfeld, WI, Gloria Wilen of Chicago, IL, and Kenneth (Karen) Seefer of Marshfield, WI.
Sharon was preceded in death by her parents and sister, Marie Jolliffee.
Visitation will be held on Thursday, April 20, 2017 from 4-7 p.m. in the Johnson-Danielson Funeral Home, 1100 N. Michigan Street, Plymouth. IN
Funeral services will be held at 11 a.m. on Friday, April 21, 2017 at Calvary Lutheran Church 1314 N. Michigan Street, Plymouth, with Rev. Eric Ahlemeyer officiating. Visitation will resume one hour prior to the service in the church.
Family burial will be held at a later time in the New Oak Hill Columbarium, Plymouth.
Memorial contributions can be made to Calvary Lutheran Church, 1314 N. Michigan Street, Plymouth, IN 46563 or Immanuel Lutheran Church, 604 S. Chestnut Ave, Marshfield, WI 54449.