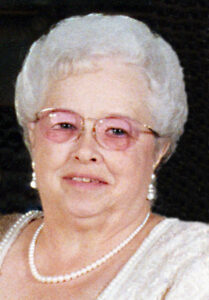 Shirley Ann (Mrs. Milton) Eyrich, 84, passed away Tuesday, July 16, 2014 at 7:10 a.m. in the St. Joseph Regional Medical Center-Plymouth Campus.
Shirley was born in South Bend, IN on February 22, 1930. In 1940, the family moved to Plymouth and she was raised the daughter of Emma A. (White) and Donald E. Amones. She graduated from West High School, Plymouth in 1948. She was a winter resident of Lake Placid, FL from 1996 to 2004. Shirley Ann was an office worker and Avon representative for many years. Shirley married Milton E. Eyrich on April 10, 1949 in Plymouth and together they enjoyed raising a family and much of what life had to offer. She was the President of Washington Elementary School PTA for two years and helped organize a hospital auxiliary unit for Parkview Hospital. Shirley is survived by her husband, her son Michael A. and Mishelle Eyrich of Plymouth, her daughter Susan K. and Tom Breeden of Plymouth, her brothers Donald E. and Nancy Ferris of Plymouth and David L. and Sue Ferris of Osceola, her grandchildren: Monica and Brad Parkhurst of Plymouth, Sara and Randy Wilde of Richwood, Ohio, Chad and Rachael Eyrich of Ft. Wayne, and Mark Neal of Pocatello, Idaho. Her great-grandchildren are: Evan Parkhurst, Alex Parkhurst, Celia Eyrich, Gianna Eyrich, Oliver Eyrich, Urban Eyrich, Addison Wilde and Conner Neal. She was preceded in death by her parents. The family will receive friends on Saturday, July 19th from 10 a.m. until Noon in the Johnson-Danielson Funeral Home, 1100 N. Michigan St., Plymouth. Funeral services will be held in the funeral home following visitation at noon. Rev. Sam Boys will lead the service.
A private burial will be in the Pleasant Hill Cemetery, Bourbon.