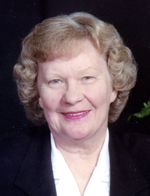 Shirley I. Woosley, 83, passed away peacefully at 9:30 a.m. on Wednesday, September 27, 2017 at Pilgrim Manor in Plymouth where she has made her home for the past four years.
She was born February 7, 1934 in Palatine, Illinois, the daughter of Edward R. and Rose (Spoerl) Petersen. Shirley received her education at Proviso East High School graduating with the Class of 1952.
On August 15, 1953 in Melrose Park, Illinois, Shirley married Charles M. Woosley. They shared 43 years together before his passing on July 2, 1996.
They were members of St. Johnâ€™s United Church of Christ in Melrose Park before the couple moved to Plymouth in May of 1996 and the worshipped at the First United Church of Christ. The Woosley family spent several summers on Pretty Lake.
Shirley first worked as a nurseâ€™s aide in West Lake Hospital in Melrose Park and retired after 25 years as Vice-President of the Maywood Proviso Bank.
She enjoyed sewing, bingo, camping, fishing, the Chicago Bears and especially time spent with her family. Shirley was an expert at baking birthday and wedding cakes. Her door was always open to those in need.
She is survived by her children and families: Pamela (Howard) Hendon of Plymouth and daughter; Amy (Brandon) Warner, Sandra J. (Thomas) McDowell of Harvey, IL and children; Thomas, Evie and Timothy McDowell, Glen C. (decâ€™d) and Lori Woosley of Villa Park, IL and children; Bradley, Eric and Margaret, Mark E. (Eileen) Woosley of Glendale Heights, IL and children; Ryan, Taylor and Ashley, Chris P. Woosley of Park City, IL, as well as, 3 great-grandchildren.
She was preceded in death by her husband and a brother Edward P. Petersen.
Visitation will be held on Monday, October 2nd from 10 a.m. EDT until 12 Noon in the First United Church of Christ 321 N. Center St., Plymouth where services will begin at Noon with Rev. Charles Krieg officiating.
Burial will be in the New Oak Hill Cemetery, Plymouth. A reception will immediately follow in the church fellowship hall.
Memorial gifts may be given to the church.