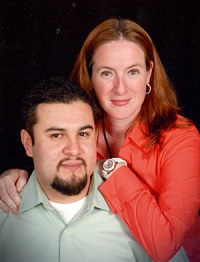 Simone D. (Loew) & Refugio E. NuÃ±ez-PeÃ±a entered into the arms of a loving Savior on Memorial Day, May 27, 2019 following an auto accident in Fulton County, Ohio. They are the parents of Isabel M., Erik L and Selia E NuÃ±ez all of Plymouth.
Simone Dorothea NuÃ±ez, 42, was born in Dettelbach, Bavaria, Germany on December 14, 1976, the daughter of Joachim O. and Roswitha B. (Ruettger) Loew, who reside in Plymouth. At the age of six the family immigrated to Canada and there, she graduated from St. David Catholic Secondary School in Waterloo, Ontario. In 1994 they moved to the United States and she then received her Associates Degree from Ancilla College, a Bachelor of Science and MBA were attained at Bethel College. For the past five years she has been a quality engineer for Zimmer Biomet of Warsaw and holds many certifications. Refugio Elisandro NuÃ±ez-PeÃ±a, 39, was born in Tiquicheo, Michoacan, Mexico on May 4, 1980, the son of Teofilo NuÃ±ez of Texas and Emiliana PeÃ±a of Elkhart. He received his education in South Bend. He has served as a shipping manager for Southwire in Bremen for the past 10 years. He was known to many as simply â€œAlexâ€.
They were united in the sacrament of Holy Matrimony on October 6, 2001 in St. Michael Catholic Church, Plymouth where they remained as a family practicing their faith. Refugio was a member of the Knights of Columbus Council 1975 and Simone with the ladies Bible study group. Family was everything to them and they enjoyed life together. They have traveled across the globe and have shared many camping trips as a family. On Memorial Day, they were returning from one of many camping trips, this one to the Canadian Niagara Falls. Refugio loved fishing at local lakes, cooking, visiting the shooting range and following various sports. Nothing in life was too challenging for Simone. She enjoyed biking and hiking, cooking, and being a mother. Together they found themselves coaching and supporting their childrenâ€™s years of soccer play. In addition to their children and parents, they are survived by Simoneâ€™s brother Christian E. (Jeri-Lynn) Loew and Refugioâ€™s siblings; Maria (Dion) Ramirez, Marlen CastaÃ±eda, Wendy CastaÃ±eda, and Zuleima (Jorge) ColÃ³n. Many other loving family members survive throughout Germany and Texas. A sister Analu â€œLuluâ€ NuÃ±ez preceded in death.
Visitation will be held on Friday, June 7th from 3 â€“ 8 p.m. in the PLYMOUTH WESLEYAN CHURCH, 11203 S. Michigan St., Plymouth. A Mass of Christian Burial will be held at 2 p.m. Saturday, June 8th in ST. MICHAEL CATHOLIC CHURCH, 613 N. Center St., Plymouth with Pastor Fr. John Korcsmar CSC and Fr. Craig Borchard officiating.
Burial will immediately follow in the New Oak Hill Cemetery, Plymouth. A reception will then be held in the St. Michael School Cafeteria.
The family is requesting in lieu of flowers memorial gifts be made to a Ronald McDonald House of your choice as they help so many families in need of a secure and close place to stay or to St. Michael Parish 612 N. Center St., Plymouth, IN 46563.