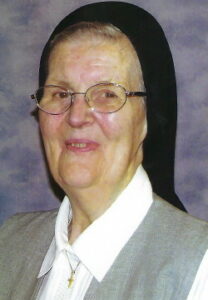 She was born in Quincy, Illinois on June 17, 1928 to Arthur and Caecilia (Broemmel) who preceded her in death along with her brothers James, Arthur and Joseph and her sisters Virginia Muehlenfeld, Rita Schulte and Milly Bruce. Sister was the sixth of seven children.

Sister Agnes entered the Poor Handmaids at the age of 18 in 1946. She professed her vows on June 25, 1949. Her ministry included time in Gary, IN and Milwaukee, WI. In both of these missions, she was a house Sister and cared for the needs of the Sisters who lived there. Sister’s longest ministry for 50 years was at the PHJC Motherhouse in Donaldson, IN. The Sisters lovingly recall that part of her ministry consisted in playing jokes on people. So considered this as her “hobby.” Sister lived her life of innocent fun, but Sister felt the favorite part of being a sister was the service she was able to offer to God for many years and the great graces she received in that service.

She officially retired on July 4, 2017 when she moved to the Catherine Kasper Home.

A private visitation will be held at the Ancilla Domini Chapel at the Center of Donaldson, IN on Friday, January 15, 2021 from 9:30 am to 11 am EST. The Mass of Resurrection will follow in the Chapel at 11:00 am EST and burial will follow the Liturgy in Mt. Carmel Cemetery, Donaldson, IN. The services will be livestreamed beginning at 11:00 am EST: www.poorhandmaids.org/live.

Memorial contributions may be made to the Poor Handmaids of Jesus Christ,