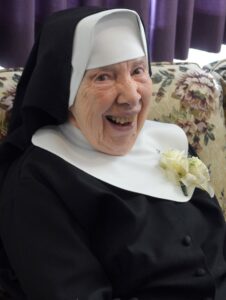 Sister Antoinette (Marie) Volk, Poor Handmaid of Jesus Christ, died at 99 yrs. old on January 1, 2022 at the Catherine Kasper Home, Donaldson, Indiana. She was just 2 weeks away from her 100th birthday.

Born to Anton and Catherine (Kuenstler), Wendelin, IL she was preceded in death by her parents along with her brothers Virgil, Anton, Don, Louis and her sister, Sr. Loretta Volk, PHJC. She is survived by her sister Ethel Zwilling.

Sister Antoinette began her ministry in the dietary departments at Angel Guardian Orphanage, St. Mary’s School Carlyle IL, St. Mary’s Hospital East St. Louis IL, and St. Joseph Hospital Fort Wayne IN. Beginning in 1960 she held dietary supervisory positions at Convent Ancilla Domini in Donaldson IN, St. Mary’s Hospital Gary IN, and St. Augustine Convent Chicago IL. In 1990 she became the Coordinator of Hospitality for the United Family Center, Chicago IL. and transitioned in 1996 as a companion to the elderly from Saint Peter and Paul parish Chicago IL. Sister Antoinette considered each new mission a new beginning and in it she made love visible. Sister’s daily living was a prayer of loving service which she offered up for each person. Before Sr. Antoinette left her last mission and retired, the presenter at her farewell expressed the sentiments of so many people: “We are humbled by her gift of prayer and the beauty of her complete trust in God not on a day-to-day basis, but, minute-by-minute.”

Sister Antoinette officially retired to the Catherine Kasper Home, Donaldson, IN on July 1, 2001. Even in retirement she continued to serve by caring for the other sisters and residents at Catherine Kasper Home. She also designed and sewed baby quilts and comforters, selling or gifting to those in need, and her creations were always admired and appreciated.