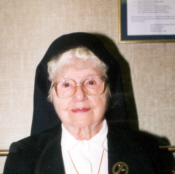 Sister Charlene Heirman, P.H.J.C., 91, died at 7:45 A.M. Tuesday November, 11, 2003 at the Catherine Kasper Home, Donaldson, Ind. where she had been a resident since 1996.
Sister Charlene was born in Loretto, Michigan on February 5, 1912 to Charles and Eulalia Snoeck Heirman. Sister entered the convent on June 15, 1936 and professed her first vows on June 25, 1938.
Sister Charlene spent her days as an x-ray technician from 1939 to 1942 at St. Elizabeth Hospital in Chicago, Illinois; she then served at St. Mary’s Hospital, Superior, Wisconsin, from 1942 to 1947. Sister Charlene worked for the next 10 years at Holy Family Hospital, in LaPorte, Indiana and then returned to St. Mary’s to work for the next 14 years. In 1971 Sister moved on to St. Joseph Hospital, Fort Wayne, Indiana, and worked as a nurse until 1983. She then continued at St. Joseph’s Hospital as a volunteer until her retirement in 1996.
Numerous nieces and nephews survive Sister Charlene.
Visitation will be held from 4:30 to 9:00 p.m. on Thursday, November 13, 2003 in the Catherine Kasper Home, Donaldson, Indiana.
The Mass of Christian Burial will be held at 11:00 a.m. on Friday, November 14, 2003 in the Catherine Kasper home, Father Ed Konerman, S.J. and Fr. William Kummer, will officiate.