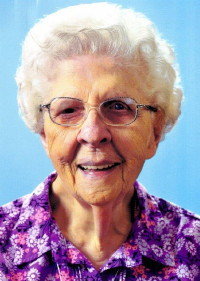 Sister Conrad Kirchhoff (Margaret), PHJC passed away on March 15, 2020 at the Catherine Kasper Home in Donaldson, Indiana. Sister Conrad was born in Detroit, Michigan to John Henry and Wilhelmine (Schmitt) Kirchhoff who preceded her in death along with her brothers Francis, John and Edward and her sister, Mary Belisle. She entered the Poor Handmaid of Jesus Christ Community as a postulant on December 13, 1943. She professed her first vows on June 25, 1946 and celebrated 70 years as a Poor Handmaid Sister in 2016. Sister Conrad graduated from Loyola University in Chicago, Illinois in 1962 with a Bachelor of Science degree in Theology and received her Masters of Science in Education from St. Francis College in Ft. Wayne, Indiana in 1965.
From 1945 until 1969, Sister was a teacher and principal in Chicago (St. Henry School), Fort Wayne, Indiana (St. Vincent Villa) and Belleville, Illinois (St. Mary School). From 1969-1973, she ministered as the PHJC Director of novices. She insisted her ministry working with young women of the 60’s and 70’s gave her the best life experience. Sister Conrad was elected Provincial of the Poor Handmaid’s American Province in 1973 and served until 1979. She returned to teaching in 1979 in Mishawaka, Indiana (St. Joseph School). She continued Leadership in the Poor Handmaid Community as a General Councilor in Dernbach, Germany from 1983-1989. After a short sabbatical, Sister became the Vice President of Mission Effectiveness at St. Joseph Medical Center in Fort Wayne (1990-2003) where she commented that she was the learner even if she was the one in charge. Upon her departure from St. Joseph Hospital Director of Nursing commented, “Sister Conrad always says that we are the heart and the hands, and the hug of the healing Christ. Sr. Conrad embodies that philosophy every day!” Having completed her ministry at St. Joseph Medical Center, she returned to the Motherhouse of the Poor Handmaids in Donaldson to do volunteer work. She quipped she was a great paper shredder. In 2006 she joined the community at Catherine’s Cottage continuing to help out where she could. Sister Conrad officially retired to the Catherine Kasper Home in 2015. Sister Conrad reflected, “As I look back over the years as a Poor Handmaid of Jesus Christ, I feel a deep sense of gratitude to God, my family and the Poor Handmaid congregation for providing the opportunities to minister in teaching, childcare, leadership, retreat work, etc. They called forth gifts I never realized I had. I’ve had the opportunity to find God in many people, countries, cultures and challenges.”
In 1999 Sister Conrad received the Raymond Rosenberger – Minette Baum Award Foundation. This award recognizes people for their diligent and faithful service with an exempt charitable organization(s) to alleviate human suffering or enhance the quality of life of persons afflicted with illness or injury, or to promote wellness through the prevention of illness, disease or injury. In 2013, Sister Conrad also received the Healthy City Award for her part in starting the Super Shot Immunization program in Fort Wayne. This program provides low-cost or free immunizations to poor children and adults in Allen County. Private services will be held, and burial in the Mt. Carmel Cemetery, Donaldson, IN. Memorial contributions may be made to the Poor Handmaids of Jesus Christ, PO Box 1, Donaldson, Indiana 46513. http://www.phjc.org