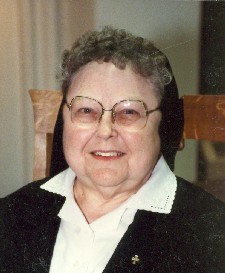 Sister David Huelskamp, PHJC, died of natural causes at 4:20 p.m. on Tuesday, April 27, 2010, in the Catherine Kasper Home. She was 88 years old. Born in Breese, Illinois, on August 11, 1921, she was the daughter of Hermann and Catherine Petermeyer Huelskamp.
Her life was blessed with service.
Sister David entered into the Poor Handmaids of Jesus Christ on June 25, 1940. Her first vows were professed on June 25, 1942, and her final vows were taken on June 24, 1947.
As a teacher, she received her B.A. in education from St. Francis College, Fort Wayne, Indiana.
Sister’s mission experience covered 55 years. She first taught grades 3 and 4 at Holy Childhood School in Illinois, then the 4th grade in Fort Wayne and South Bend, followed by five years with the 3rd grade at the Angel Guardian Orphanage in Chicago.
For the next nine years she was a 5th grade teacher at St. Joseph in Mishawaka, Indiana, followed by elementary grades at St. Monica in Mishawaka and St. Vincent, in Fort Wayne.
She taught math at two schools, Mater Dei High School in Breese, Illinois, and Ancilla College until her retirement in 1998.
Sister David is survived by numerous nieces and nephews. She is the aunt of Sister Julia Huelskamp and Associates Al and Eleanor Fiascone, Dennis and Lorraine Huelskamp and Mary Lou Hansen who lived with the Huelskamp family.
There are also many great as well as great-great nieces and nephews.
Preceding Sister David in death are her parents and nine deceased brothers and sisters. They are Emma Petranih, Joseph Huelskamp, Rose Rengier, Angie Hall, Alex Huelskamp, Sister Erwin, Sister Lawrence and Sister Lorine Huelskamp, PHJC, and Mary Zimmerly.
Visitation for Sister David Huelskamp will be on Friday, April 30, 2010 from 3 to 8 p.m. in the Catherine Kasper Chapel, Donaldson. A Wake Service will begin at 7 p.m.
A Mass of Resurrection for Sister David will be on Saturday, May 1, 2010, at 11 a.m. in the Catherine Kasper Chapel. The Reverend Father Ed Konnerman will officiate.
Interment will be in the Mount Carmel Cemetery, Donaldson.
The Johnson-Danielson Funeral Home, 1100 N. Michigan St., Plymouth, assisted with arrangements.
Memorial gifts may be given to the P.H.J.C. Ministries.