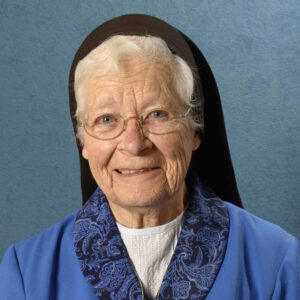 She was born in Quincy, IL on June 16, 1923 to Theodore and Anna (Kroeger) who preceded her in death along with her brothers Albert, John, Clarence, and Carl and her sisters Virginia and Esther. She was the sixth of seven children. She is survived by her sister-in-law Margie Kuhn and several nieces and nephews.

No life story would be complete without acknowledging that Sister was a diehard Cardinal baseball fan. Visitors to her room might readily conclude that was so true when viewing walls, mementos and often her clothing. Her excitement with the Cardinal teams passed onto others most especially to those when she ministered when she was close to St. Louis not so much the Chicago area!

She officially retired on February 17, 2013 and moved to Catherine’s Cottage and then moved to the Catherine Kasper Home at the Center of Donaldson, IN.

Memorial contributions may be made to the Poor Handmaids of Jesus Christ,
PO Box 1, Donaldson, Indiana 46513 or on www.poorhandmaids.org.