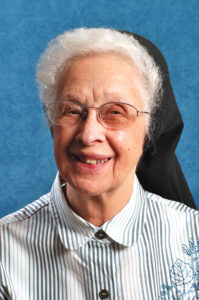 Sister Inez Wilmering (Louise), Poor Handmaid of Jesus Christ, died on Tuesday, May 10th at the Catherine Kasper Home, Donaldson, Indiana. She was 99 years of age.

She was born in Mishawaka, IN to Paul and Catherine (Young) who preceded her in death along with her brother John R. Wilmering.

Louise entered the Poor Handmaid Community on December 8,1940 taking the name Sister Inez. She professed her vows on June 25,1943.

Sister Inez’ early ministry was in clerical work at three hospitals. In 1952 she received her nursing degree and served as a nurse and supervisor at various PHJC hospitals. The hospitals included St. Mary Mercy, Gary, IN; St. Mary, East St. Louis IL; St. Joseph, Fort Wayne IN; St. Joseph, Mishawaka, IN. At St. Catherine, East Chicago, IN Sr. Inez was discharge planner and clinical instructor in pharmacology and diabetes. She completed her nursing career at the Catherine Kasper Home in Donaldson, IN from 1977-1985. She then moved on to internal community service being quite adept at wrangling the challenges of Medicare in the business office. Later, she served as a faithful volunteer. She loved God’s beautiful earth and being outdoors. Her garden was her joy!

Sister Inez shared that her call in Baptism gave her the wonderful gift of faith. Faith was her guide and support throughout her 99 years and continued to grow as she experienced God’s love for all of creation.

Visitation will begin at 9:30am EDT on Tuesday, May 17 in Catherine Kasper Home chapel, with a reflection and sharing of her life at 10:00am EDT. The Mass of Resurrection will follow at 11:00am EDT with burial in Mt. Carmel Cemetery.

Services will be live-streamed at poorhandmaids.org/live