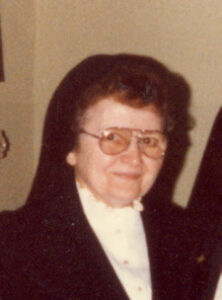 Sister Jeanette Cyr, P.H.J.C., 96 years-old, died of natural causes at 12:15 P.M. in the Catherine Kasper Life Center on Tuesday, December 7, 2010.
Sister Jeanette was born, the daughter of Stephen and Milanese Patnaude Cyr, in Fowler, Indiana on June 21, 1914. She entered the Poor Hand Maids Convent on December 7, 1930 and professed her vows on June 25, 1933.
She was educated and trained in home nursing and social services.
Her ministry in life was as a kindergarten teacher, an office manager and bookkeeper and home nursing with a ministry to the elderly.
Sister Jeanette is survived by a brother, the Rev. Lawrence Cyr, C.P.P.S., Liberty, Missouri, and by a sister-in-law, Esther Cyr. Many nieces and nephews survive as well.
Visitation will be on Friday, December 10, 2010, from 4:30 to 9 p.m.EST in the Catherine Kasper Home Chapel, 9601 Union Road, Donaldson, Indiana.
A Mass of the Resurrection will be held for Sister Jeanette on Saturday, December 11, 2010, at 10 a.m. EST in the Catherine Kasper Home Chapel.
The celebrants will be the Rev. Lawrence S. Cyr, the Rev. Martin Kirk, C.M.F. and the Rev. Ed Konerman.
Interment will be in the Mount Carmel Cemetery, Donaldson, Indiana.
Funeral Director: Kevin L. Russell