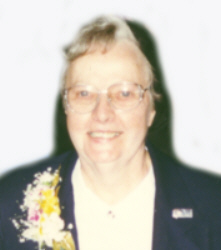 Sister Jude Henken, (Cecilia), 88, passed away at 3:15 a.m. on Friday, February 1, 2013, in the Catherine Kasper Life Center, Donaldson.
Sister Jude was born in Germantown, Illinois on October 18, 1924 to Gerhard and Bernadine (Timmerman) Henken.
Sister Jude was renowned for her creative decorating of cakes and bakery “goodies” as she worked diligently in Misiercordia Home in Chicago, IL. She enjoyed ministering in Child Care in Belleville, IL and teaching in East Chicago, IN. With her fun loving spirit and those “blue eyes”, Sister Jude captured the heart of many throughout Indiana, Southern Illinois, Michigan and Iowa.
Sister retired June of 2005 here in Ancilla Domini with the Poor Handmaid Community.
She is survived by nieces, nephews, great nieces and nephews, and many friends, especially the John Canon Family of Chicago and community of the Poor Handmaids of Jesus Christ.
Preceding her in death are her parents; brothers: Arthur, Joseph, John and George Henken; sisters: Antonia Henken, Helen Henken, Sister Bernardi, PHJC, Bernadine Henken, Sister Benna, SSPS, Mary Henken, Frances (Walter) Peters and Clara (Steve) Horvath.
Visitation will be from 4:30 to 8:30 p.m. on Monday, February 4, 2013 in the Catherine Kasper Home Chapel, 9601 Union Road, Donaldson. Prayer service will be held at 7:00 p.m.
Funeral liturgy will be at 11:15 a.m. on Tuesday, February 5, 2013, in the Chapel.
Burial will be in Mt. Carmel Cemetery, Donaldson.