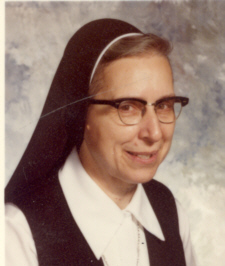 Sister Loretta Volk, 87, died of natural causes in the Catherine Kasper Life Center at 8:05 p.m. Saturday, Dec. 4, 2010.
Sister Loretta was born Ernestine Philomena Volk in Wendelin, IL Dec. 31, 1922, the daughter of Anton C. and Catherine (Kuenstler) Volk.
Sept. 8, 1944, she entered the Poor Handmaids of Jesus Christ Convent and professed her vows June 25, 1947. Prior to entering the convent, she stayed home to help her mother with the six children in her family.
Sister Loretta received her B.S. in Education and her master’s in Education and then went on to teach in Chicago, Ill., Edwardsville, Ill., Beckemeyer, Ill., Mishawaka, Ind., and East Chicago, Ind. She later became principal in Hecker, Ill. When she retired from teaching and administration, Sister Loretta became a wonderful Sister Hostess at St. Mary Medical Center in Gary, and St. Catherine Hospital, East Chicago.
Sister Loretta is survived by two sisters, Sister Antoinette Volk of Donaldson, IN and Ethel (Herman) Zwilling of Claremont, IL, a brother, Don (Arlene) Volk of Ingraham, IL and two sister-in-laws; Dorothy (Anton) Volk, Washington, IL and Lelia (Louis) Volk, Claremont, IL, and many nieces and nephews.
She was preceded in death by her parents and 3 brothers, Anton, Louis and Virgil (Korea).
Friends may call at the Catherine Kasper Home Chapel Wednesday, Dec. 8, from 4:30 to 9 p.m.
The Mass of the Christian Burial will be celebrated by the Reverend Fathers Robert Zwilling, James Buerster and Ed Konerman, S.J. Thursday, Dec. 9 at 11 a.m. EST.
Burial will be in Mt. Carmel Cemetery, Donaldson, Indiana.
An additional memorial service will be held at Holy Cross Church in Wendelin on Tues, December 14, at 6:30pm.
Funeral Director: Kevin L. Russell