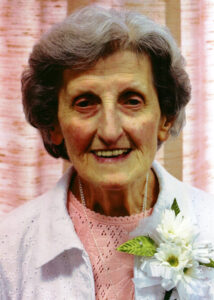 Sister Lucy (Rose) Megaro a Poor Handmaid of Jesus Christ died on July 12, 2018 in the Catherine Kasper Home in Donaldson, Indiana. She was born in Chicago, Illinois on June 30, 1932 to Carmen and Lucia (Ferarra) Megaro who preceded her in death along with her brothers, Carmen, Christopher and Tony and her sisters, Josie Amato and Della La Femina. She was the youngest of the six children. Sister Lucy is survived by nieces and nephews.
Rose, her name given at birth, was educated by the Poor Handmaids of Jesus Christ and after starting high school, she worked as a beautician on the Northside of Chicago. She said she chose to be a Poor Handmaid because she experienced how joyful and caring the Sisters were with children of all ages. Sister Lucy was a houseparent for adolescent girls at St. Vincent Villa in Fort Wayne, Indiana from 1954-1957. She was expecting to continue to care for girls when she transferred to Angel Guardian Orphanage in Chicago 1957. She was surprised when she was assigned adolescent boys, but her love of sports helped her win them over. She coached many intramural softball teams. Later, she also cared for girls at Angel Guardian Orphanage and served there for the next 17 years. Sister received her Associate of Arts degree in child development at Kennedy King College, Chicago and her Bachelor of Arts degree in early childhood at Mary Crest College, Davenport, Iowa. She then taught preschool at Angel Guardian Day Care on the south side of Chicago from1985-1990. From 1991 until 2011, Sister Lucy ministered in home health care to the elderly in Chicago and Cincinnati, Ohio. After semi-retiring, she became a volunteer for the Little Brothers of the Poor to continue service to the elderly. Sister shared, â€œI have been blessed and challenged in many ways in sharing my gifts with people in various stages of their lives.â€
Sister Lucy officially retired to the Catherine Kasper Home in 2013.
Visitation will be held at the Catherine Kasper Home in Donaldson, Indiana on Monday, July 16, 2018 from 4:30 â€“ 8:00 p.m. EDT. A Prayer Service will be held that same evening at 7:00 p.m. EDT.
The Mass of Resurrection will be celebrated at Catherine Kasper Home on Tuesday, July 17, 2018 at 11:15 a.m. EDT.
Burial will follow in the Mt. Carmel Cemetery, Donaldson, Indiana.
Memorial contributions may be made to the Poor Handmaids of Jesus Christ, P.O. Box 1, Donaldson, Indiana 46513 or on www.poorhandmaids.org.