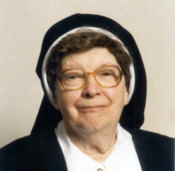 Sister Gabriel Giesken, 91, died at 3:40 a.m. in the Catherine Kasper Home, Donaldson, Ind., on October 28, 2004.
She was born in Miller City, Ohio on May 5, 1913, the daughter of Frank J. and Anna Vincke Giesken.
A Poor Handmaid of Jesus Christ, Sister Gabriel entered the convent on August 11, 1932, and professed her first vows on June 25, 1934
As her ministry in life, Sister Gabriel taught school from 1934 to 1937 at St. Mary School in Centralia, Ill. From 1937 to 1940, she taught at St. Lawrence School in Sandoval, Ill. In 1940, Sister went to the Angel Guardian Orphanage in Chicago, Ill. and worked in the office. Nine years later she became a practical nurse at St. Catherine Hospital in East Chicago, Ind., and worked there until 1970.
From 1970 until 1986, Sister Gabriel was at St. Mary Medical Hospital in Gary, Ind., as a Patient Visitor and a Pastoral Associate. She continued in Gary as a volunteer in the Pastoral Care Department from 1987 until her retirement at the Catherine Kasper Home in 1989.
Sister Gabriel is survived by her sister, Anna Mae Ellert, Waterloo, Ind., and by several nieces and nephews.
Visitation will be at the Catherine Kasper Home on Sunday, October 31, 2004, from 4:30 p.m. until 9 p.m.
A Mass of Christian Burial for Sister Gabriel will be held at 11 a.m. on Monday, November 1, 2004, in the Catherine Kasper Home. The Rev. Father Edward Konerman, S.J. will officiate.