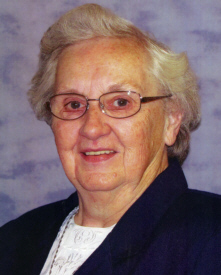 Sister Magdalen Hellmann (Lorraine) PHJC passed away on June 17, 2016 at the Catherine Kasper Home in Donaldson, Indiana, after a life spent appreciating and nurturing the lives of children and all growing things entrusted to her care.
Sister Magdalen was born in Aviston, Illinois to Henry and Elizabeth (Ottensmeier) Hellmann who preceded her in death along with her brothers Joseph, Cletus and Stephen and her sisters Genevieve Hellmann and Bernadine Kussatz . Her sister Rita Heimann survives along with many nieces and nephews. Sister Magdalen credited her father and life on the family farm for introducing her to the miracle of birth and growth in both nature and humankind. She entered the Poor Handmaids of Jesus Christ Community as a postulant on December 8, 1948, professed her first vows on June 25, 1951, and celebrated 65 years as a Poor Handmaid Sister this year. Sister Magdalen earned a Bachelor of Science degree in Sociology and Psychology from Loyola University in Chicago, IL in 1960. From 1951 until 1976 Sister ministered as a childcare worker in Chicago (Angel Guardian Childrenâ€™s Home) and in Belleville, IL (St. Johnâ€™s Children Home). From 1976-1990 she ministered in management at Ancilla Domini Convent in Donaldson, IN. From 1990 until 2003 she served as a Sacristan at the Basilica of the Sacred Heart at Notre Dame University. After retiring from Notre Dame and working with college students she returned to working with the younger setâ€¦caring for babies at Nazareth Home in East Chicago, IN. Following her 11 years at Nazareth Home Sister Magdalen â€œofficiallyâ€ retired to the Catherine Kasper Home in November 2014. All who knew Sister Magdalen appreciated her gentle sense of humor, her caring ways, her skills with handicrafts, gardening, and quilting. As she appreciated the miracle of growth of the tiny seed into its full potential with Godâ€™s help, those who knew her found in her a nurturing, caring, special friend.
Visitation will be held at the Catherine Kasper Home on Tuesday, June 21, 2016 beginning at 4:30 p.m. EST. A Prayer Service will be held the same evening 7:00 p.m. EST Funeral Liturgy will be held in the Catherine Kasper Home Chapel on Wednesday, June 22, 2016 at 11:15 a.m. EST
Burial will follow in the Mt. Carmel Cemetery, Donaldson, IN.