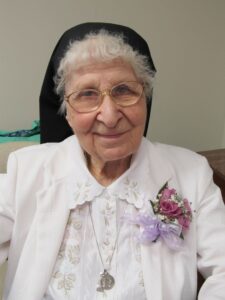 She was born in Wanlock, Iowa to Thomas and Mary (Slahta) who preceded her in death along with her brothers Bill, Thomas and Frank McEllis and her sisters Leona Vilianoff and Marie Spencer. She was the oldest of 6 children. Sister Margaret is survived by several nieces.

Sister Margaret entered the Poor Handmaid Community on December 1, 1942 taking the name Sister Raymond and professed her vows on June 25, 1945.

Sister Margaret received her B.A. from Alverno College Milwaukee WI and her Master’s degree from St. Mary College Winona MN. She was a Teacher/Principal for her initial years in ministry. She ministered at St. Augustine Chicago IL; St. Joseph Mishawaka IN; Angel Guardian Orphanage Chicago IL; St. Boniface Edwardsville IL; St. Monica Mishawaka IN; and St. Mary’s East Chicago IN. In 1987 she joined the community at St. Catherine of Siena Convent and for 18 years she provided Parish Ministry specifically to shut-ins. In 2005 she moved to the PHJC Motherhouse in Donaldson IN and provided community service. Sister was a witty conversationalist and had a wonderful sense of humor. She was an endearing friend and advocate for the elderly. Most especially Sister enjoyed her moments spending time before the Blessed Sacrament.

Sister Margaret lived for 2 years at Catherine’s Cottage and in 2015 she moved to the Catherine Kasper Home at the Center of Donaldson, IN.

A private visitation will be held at the Ancilla Domini Chapel at the Center of Donaldson, IN on Monday, January 11, 2021 from 9:30 am to 11 am EST. The Mass of Resurrection will follow in the Chapel at 11:00 a.m. EST and burial will follow the Liturgy in Mt. Carmel Cemetery, Donaldson, IN. The services will be livestreamed beginning at 11:00 am EST: www.poorhandmaids.org/live.