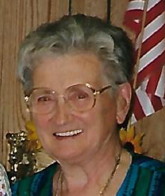 Sister Mary Boby (Mary Frances Hanon), Poor Handmaid of Jesus Christ, died on Wednesday, December 5, 2018 at the Catherine Kasper Home, Donaldson, Indiana. She was born in Gary, Indiana on December 23, 1923 to Otto and Fannie (Stocking) Hanon who preceded her in death along with her brothers Edward Hanon and George Lewis Hanon and her sisters Vivian Hanon, Vione Kelly, Catherine Flood, and Sister Margaret Hanon, PHJC. She was the sixth child of seven children. Sister Mary is survived by her son, George Boby Jr., her grandchildren Robert Boby, Jay Boby and Trisha Boby, 7 great grandchildren and 1 great-great grandchild.
Sister Mary entered the Poor Handmaid Community in 1944 taking the name Sister Mary Georgia and left the Community in 1954. She then married George Boby Sr. in January 1956 and adopted his son, George Boby. After her husbandâ€™s death in 1995, Sister re-entered the Poor Handmaids Community in 2001 joining her sister, Sister Margaret Hanon PHJC. Sr. Mary professed her final vows August 3, 2002.
Sister Mary graduated with a B.S. in Education from Loyola University in Chicago, IL and received her masterâ€™s degree in Education from Loyola University in Chicago, IL. She was a teacher at St. Anthony School, Beckemeyer, IL; St. Monicaâ€™s School, Mishawaka, IN; and St. George School, New Ulm, MN. When she left the community she continued as an educator at Columbus School, East Gary IN; St. Francis Xavier, Lake Station, IN; and Meister Elementary, Hobart Township, IN. She loved playing the organ and after she was unable to play due to her failing eyesight she was observed tapping her fingers to the organ music during daily Mass. From 2002 until 2013 Sr. Mary volunteered at the Catherine Kasper Home and continued this ministry after she moved to Catherineâ€™s Cottage in 2006. She officially retired on August 7, 2013 when she moved to the Catherine Kasper Home.
Visitation will be held from 3:00-4:00 pm EST in the Catherine Kasper Home Chapel at the Center at Donaldson, Indiana on Friday, December 7, 2018. The Mass of Resurrection will follow at 4:00 pm EST.
Following the Mass, burial in the Mt. Carmel Cemetery, Donaldson, Indiana will take place.
Memorial contributions may be made to the Poor Handmaids of Jesus Christ, PO Box 1, Donaldson, Indiana 46513 or on www.poorhandmaids.org.