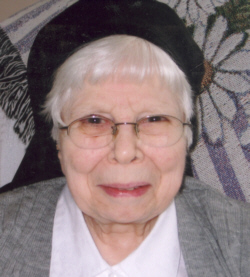 Sister Mary Cyril Coesens, PHJC died June 11, 2010 after an extended illness. Sister was 95 years of age and lived in the Catherine Kasper Life Center, Donaldson, IN. since 2002.
Born in Mishawaka, Indiana on July 2, 1914, she was the daughter of Eugenia and Cyril Coesens. Shortly after their marriage, they came to America and settled in the Belgium Parish of St. Bavo’s in Mishawaka, IN.
Sister Cyril was “little but mighty.” She loved and taught children in the elementary schools for forty-four years.
In 1976, sister worked nights as a nurses aide and later in physical therapy.
Sister was preceded in death by her parents, two brothers, Alfred and Richard and two sisters, Mary and Velma.
She is survived by many nieces and nephews.
Visitation for Sister Cyril will be on Tuesday, June 15, 2010, from 4:30 pm – 9:00 pm in the Catherine Kasper Home Chapel Donaldson, IN. Evensong will be at 7:00 pm.
A Mass of Resurrection for Sister Cyril will be at 11:00 am Wednesday June 16, 2010 in the Catherine Kasper Home Chapel. The Reverend Father Ed Konnerman & Reverend Father Michael Winkowski will officiate.
Internment will be in Mount Carmel Cemetery, Donaldson, IN.
Memorial gifts may be given to the P.H.J.C. Ministries. P.O. Box 1 Union Rd Donaldson, IN 46513.