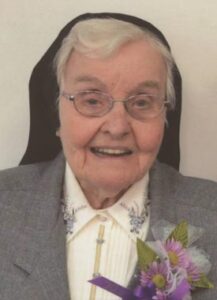 Sister Mary Edward Mason PHJC (Estella Mason) PHJC died on June 19, 2015 at the Catherine Kasper Home in Donaldson, Indiana. She was 92 years of age.
Sister is survived by her loving sister, Barbara Mitchell of Quincy Illinois. She was preceded in death by her brothers Edward, Charles, and John and her sisters Helen, Mary Lee and Frances Ann.
Sister Mary Edward was born in Quincy, IL on July 5, 1922 to Edward Leland Mason and Estella Carmel Herring. On September 7, 1941 she entered the Poor Handmaids of Jesus Christ Congregation in Donaldson, Indiana and professed her first vows on June 25, 1944. Sister received her B.S. in Sociology at Loyola University in Chicago and her Masters in Education at Loyola University in Chicago. Sister Mary Edward’s ministerial life included being an elementary teacher, child care worker at Angel Guardian Orphanage, Formation Director, Sister Hostess at St. Catherine’s Hospital in East Chicago, Indiana and Volunteer at Nazareth Home East Chicago Indiana as well as St. Vincent’s Home in Quincy Illinois. Sister loved creation and called herself an “outdoor” person. She experienced log cabin and tenting retreat days as well as creating gardens. Her love for the outdoors even took her to the sky and she ventured into a onetime experience — skydiving at the age of 80 years. Most of all she is remembered as a loving and caring Sister who touched many people with the beauty of her smile and positive gentle spirit. Sister retired to the Catherine Kasper Home in 2012. Visitation will be held in the Catherine Kasper Home Chapel Monday, June 22, 2015 from 4:30 pm – 8 pm and a prayer service will be held same evening at 7 pm.
Mass of Christian Burial will be held Tuesday, June 23, 2015 at 11:15 am in the Catherine Kasper Home Chapel in Donaldson, Indiana. Burial will follow in the Mt. Carmel Cemetery, Donaldson, IN. In lieu of flowers, a donation can be made to the Poor Handmaid of Jesus Christ Development Fund. P.O. Box 1 Donaldson, IN 46513 Online donations can be made at www.poorhandmaids.org