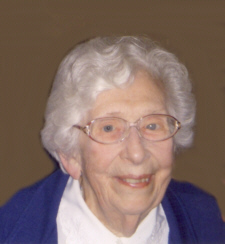 Sister Nola Weiner, PHJC died July 11, 2010 after an extended illness. Sister was 98 years of age and lived in the Catherine Kasper Life Center, Donaldson, Indiana since 1992. Born in Cincinnati, Ohio on January 16, 1912 she was the daughter of James and Emma Calme Weiner. Sister entered the Poor Handmaids of Jesus Christ convent on September 5, 1932 and professed her first vows on June 25, 1935.
She graduated from DePaul University in Chicago, Illinois in 1947 with a degree in Nursing.
Sister Nola’s ministry in life was as a healthcare administrator and a rehabilitation coordinator. She worked in hospitals from 1938 to 1987, from Wisconsin to New Mexico; she spent most of her ministry working in hospitals in the Chicago area.
Sister Nola was the 2009 recipient of the Ledgend’s Award.
She is survived by many nieces and nephews.
Visitation for Sister Nola will be on Tuesday, July 13, 2010, from 4:30 pm – 9:00 pm in the Catherine Kasper Home Chapel Donaldson, IN. Evensong will be at 7:00 pm.
A Mass of Resurrection for Sister Nola will be at 11:00 am Wednesday July 14, 2010 in the Catherine Kasper Home Chapel. The Reverend Father Dan Collins will officiate. Internment will be in Mount Carmel Cemetery, Donaldson, IN
Memorial gifts may be given to the P.H.J.C. Ministries. P.O. Box 1 Union Road Donaldson, Indiana 46513