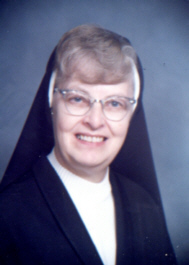 Sister Wilma Boeving, (Dolores Ruth) PHJC passed away on March 26, 2017 at the Catherine Kasper Home in Donaldson, Indiana on the eve on the Feast of the Annunciation. The Feast of the Annunciation is a special Feast Day for the Poor Handmaids. Luke 1:26-38 tells of Gabriel’s visit with the message that Mary will conceive and give birth to Jesus. Mary replies, â€œBehold, I am the handmaid of the Lord. May it be done to me according to your word.â€
Like Mary, Sister Wilma replied â€œyesâ€ to being a Poor Handmaids of Jesus Christ. She entered the PHJC Community as a postulant on September 1, 1946 and professed her first vows on June 25, 1949. Sister Wilma was born on December 2, 1926 in St. Louis Missouri to William and Bertha (Tonnies) Boeving who preceded her in death along with her brothers, Cornelius and Wilbert and her sisters, Bernadine Ronnerman and Sister Bertram Boeving, PHJC. Sister Wilma studied Liberal Arts at Ancilla College, Donaldson, received a bachelorâ€™s degree in Food and Nutrition from Mundelein College, Chicago, and her Masters in Hospital Administration from St. Louis University. While attending college, Sister Wilma volunteered with the senior girls of Angel Guardian Orphanage in 1950. Her studies prepared her to be Dietary Director at St. Joseph Hospital Fort Wayne, Indiana and St. Mary Hospital in East St. Louis, Illinois. After returning to school for her Masters in Hospital Administration, she became Assistant Administrator at St. Mary Medical Center in Gary and Hobart, Indiana and Vice President at Ancilla Systems Health Service in Des Plaines and Elk Grove Illinois. Her career in health care ministry spanned 32 years and included service on various hospital and diocesan boards.
Sister Wilma also was a member of the Motherhouse Property Study in 1983 which led to the major renovation of the PHJC Motherhouse and creation of new ministries. In addition, she served as a Pastoral Associate at St. John the Baptist Church in Quincy, Illinois, as Development Director for the Poor Handmaids, Administrator for Hincke/Sense Home in Belleville, Illinois and as Activity Director/Human Resource/Sacristan at Meredith Home in Belleville. Sister Wilma volunteered at St. Elizabeth Hospital in Belleville and Maria Care Center in Red Bud, Illinois until she retired to the Catherine Kasper Home in 2000. In regard to the many people whose lives she touched, she said, â€œI believe I was always enriched by those with whom I associated during my lifetime. It takes a lifetime to extend my gratitude. I pray that I did not lose the opportunity to show each person my gratitude to God for their important place in my life.â€
Visitation will be held at the Catherine Kasper Home on Thursday, March 30, 2017 beginning at 4:30 p.m. (EDT) A Prayer Service will be held the same evening 7:00 p.m.
Funeral Liturgy will be held in the Catherine Kasper Home Chapel on Friday, March 31, 2017 at 11:15 a.m. (EDT) Burial will follow in the Mt. Carmel Cemetery, Donaldson, Indiana.
Memorial contributions in memory of Sister Wilma may be made to the Poor Handmaids of Jesus Christ, PO Box 1, Donaldson, IN 46513.