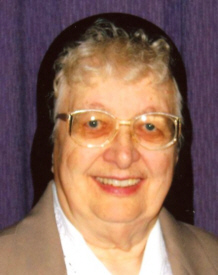 Sister Alice Kunkel (Dolores) Poor Handmaid of Jesus Christ (PHJC) died on August 8, 2015 at 3:10 pm in the Catherine Kasper Home in Donaldson, IN.
Sister Alice is survived by her nieces, nephews and friends. She was preceded in death by her parents, John and Elizabeth, and her brothers Aloys and Edward and her sisters, Sister Johnel PHJC, Leona Feldman and Helen Kunkel.
Sister Alice was born in Carlyle, Illinois on July 27, 1921 to John Kunkel and Elizabeth Rolfers. On December 7, 1944 she entered the Poor Handmaids of Jesus Christ congregation in Donaldson, Indiana and professed her first vows on June 25, 1947. Sister received her Bachelor of Science in Education degree at Alverno College in Milwaukee, Wisconsin and studied at the University of Notre Dame in the MBA program. Sister’s served in ministry for 65 years in various parishes in the Chicago IL, Gary IN and Fort Wayne- South Bend IN dioceses. In 1968 she returned to Convent Ancilla Domini in Donaldson, IN and ministered in the Business office from 1968-2004. This was the ministry she liked the best since she was a bookkeeper in the business office at the Moran Shoe Company in Carlyle office for five years before entering the PHJC Community. She officially retired to the Catherine Kasper Home in 2012.
Visitation will be held Friday, August 14, 2015 from 4:30- 8 pm
Prayer Service will be held Friday evening 7 pm in the CKH Chapel
The Resurrection Liturgy will be held Saturday, August 15, 2015 at 11:15 a.m.
Burial will follow in the Mt. Carmel Cemetery, Donaldson, IN.