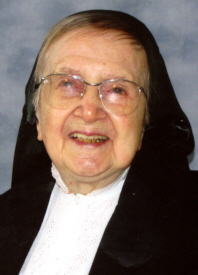 Sr. Aline Clesen, 98, passed away at 3:25 p.m. on Tuesday, December 9, 2014 at the Catherine Kasper Life Center, Donaldson.
Born on August 10, 1916 in Chicago, Illinois, Sr. Aline was the youngest daughter of John and Susan (Sampont) Clesen. She had six siblings.
Sr. Aline entered the Poor Handmaids of Jesus Christ congregation in Donaldson, Indiana on September 3, 1934 and professed her first vows on June 25, 1937. She received her Master’s Degree in Education and served as an educator, sacristan and organist in Carlyle, IL, Hecker, IL, Fort Wayne, IN, Germantown, IL, New Ulm, MN and Chicago, IL. She served as the Ancilla College Registrar in Donaldson IN from 1976-1992 and as Volunteer in the Registrar’s office from 1992-2001.
Sr. Aline is survived by several nieces, nephews and friends.
Visitation will be from 4:30 – 9:00 p.m. EST on Thursday, December 11, 2014 in the Catherine Kasper Home Chapel, 9601 Union Road, Donaldson. Prayer service will be held at 7:00 p.m. EST in the Chapel. Funeral liturgy will be at 11:15 a.m. EST Friday, December 12, 2014 in the Catherine Kasper Chapel. Burial will follow in the Mt. Carmel Cemetery, Donaldson.