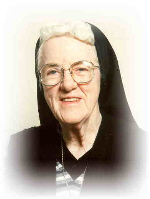 Sister Carol Glosemeyer, 85, of the Poor Hand Maids of Jesus Christ (P.H.J.C.), died at 1 p.m. on Monday, July 22, 2002, in the Catherine Kasper Home, Donaldson. Born in Quincy, Illinois, on September 20, 1916, she was the daughter of Theodore and Anna Tushous Glosemeyer.
She entered the convent on June 25, 1944, and professed her first vows on June 25, 1946.
As her primary ministry in life, Sister Carol took care of homeless boys for 26 years in three orphanages: St. Vincent Villa, Fort Wayne, Ind., Angel Guardian, Chicago, Ill., and St. John’s in Belleville, Ill.
She was a nurses’ aide for ten years at Loretta Hospital, New Ulm, Minn. and St. Elizabeth Hospital, Chicago, Ill.
Sister also spent six years as the Director of Occupational Therapy at Meredith Memorial Home in Belleville, Ill. In addition, for three years was a volunteer at St. Catherine Hospital in East Chicago, Ind.
After a lifetime of service, she retired in 1990, and entered the Catherine Kasper Home in Donaldson.
Sister Carol is survived by several nieces and nephews.
Visitation will be from 4:30 to 9 p.m. on Wednesday, July 24, 2002, in the Catherine Kasper Home.
A Mass of Christian Burial, officiated by Father Edward Konerman, S.J., will take place in the Catherine Kasper Home chapel at 11 a.m., Thursday, July 25, 2002.
Interment will be in Mt. Carmel Cemetery, Donaldson, Ind.