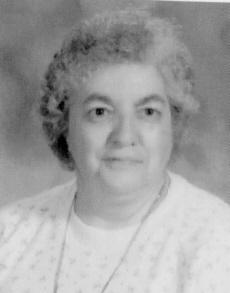 Sister Cecelia Bianchino, 84, died in St. Joseph Regional Medical Center, Plymouth, at 5:56 p.m. on Saturday, February 26, 2011.
Born in Chicago, Ill., on September 29, 1926, she was the daughter of Daniel and Josephine Inorio Bianchino.
She entered the convent on October 11, 1950, and took her final vows as a Poor Handmaid of Jesus Christ on June 25, 1953.
Sister Cecelia’s ministry in life was as an educator and a teacher. She earned her Masters of Education and later served as a Bookkeeper, Director of Fiscal Affairs, Staff Accountant, Librarian, Director of Finance and Archival Ministry.
She is survived by family members Mrs. Marge Peters and Mr. and Mrs. J. Nazimek and by longtime friends Mr. and Mrs. C. Gustafson and Mr. and Mrs. M. Fisher.
Visitation for Sister Cecelia will be in the Catherine Kasper Home Chapel, 9601 Union Road, Donaldson, Ind., from 4 to 9 p.m., with the Prayer Service at 7 p.m. on Wednesday, March 2, 2011.
The Liturgy will be celebrated by the Rev. Ed. Konnerman at 11 a.m. on Thursday, March 3, 2011, in the Catherine Kasper Home Chapel.
Internment will be in the Mt. Carmel Cemetery, Donaldson, Indiana.