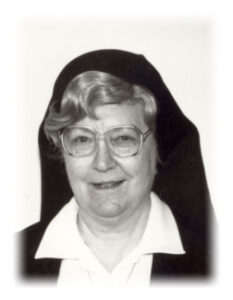 Sr. Cecile (Pauline) Wisman, PHJC, passed away at 11:23 a.m. on Thursday, March 29, 2012 in the Catherine Kasper Life Center, Ancilla Domini. She was 95 years old and a former principal of Ancilla High School.
She was born Pauline Wisman on January 15, 1917 the daughter of John G. and Catherine (Knuf) Wisman in Quincy, Illinois. She was raised there with her 12 brothers and sisters who have preceded her in death.
On December 4, 1943 she entered the convent at Ancilla Domini and on June 25, 1946 she professed her vows and celebrated her 65th anniversary in 2011.
She attained a B.S. in French and History and M.A. Degrees in Education and Modern Language and served as a Principal of Ancilla High School, she taught in Indiana, Illinois and Minnesota and also served as an Administrator at Ancilla College.
Sister is survived by a niece, Marilyn (Richard) Bocke and many nieces, nephews and cousins.
Calling will be at the Catherine Kasper Chapel on Sunday April 1st from 5 – 9 p.m. with a Prayer Service at 7 p.m. A Mass of Christian Burial will take place at 11:15 a.m. on Monday in the Chapel. Burial will follow in Mt. Carmel Cemetery on the grounds of Ancilla Domini.
Memorial gifts may be made to Ancilla Domini, P.O. Box 1, Donaldson, IN 46513