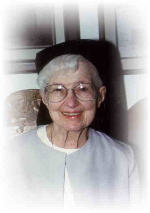 Sister Elizabeth Boll, 96, died in the Catherine Kasper Home at 4:20 p.m. on Monday, July 22, 2002. She served her God as a Poor Hand Maid of Jesus Christ for 73 years. Born in Quincy, Ill., on March 29, 1906, she was the daughter of Henry J. and Frances Kreinberg Boll.
She entered the convent on July 21, 1927 and professed her first vows on June 27, 1929.
She earned Bachelors and Masters degrees and a Ph.D. in education.
Sister Elizabeth’s life’s ministry was in education. She was a school teacher and a principal. She taught for 16 years at St. Augustine School and St. Henry School in Chicago. She also taught at St. Mark’s in Gary, Ind.
In 1945, she became the principal of St. Mary’s in Trenton, Ill. She was a principal for 38 years, serving at St. Augustine, Chicago, Ill.; Angel Guardian, Chicago, Ill.; Mater Dei, Breese, Ill.; and St. Mark’s, Gary, Ind.
For one year, 1975 to 1976, Sister Elizabeth was the registrar at Ancilla College. She volunteered for work in the Ancilla College library from 1986 until her retirement in August of 2000.
Sister Elizabeth is survived by a brother-in-law, Maurice Garriga, of El Cerita, Calif., and by one nephew.
A celebration of her life and visitation with her fellow nuns will be from 4:30 to 9 p.m. on Thursday, July 25, 2002, in the Catherine Kasper Home.
A Mass of Christian Burial will be held on Friday, July 26, 2002, at 11 a.m. in the Catherine Kasper Chapel, Donaldson, Indiana. The Rev. Father Edward Konerman, S.J., will officiate.
Interment will be in Mt. Carmel Cemetery, Donaldson, Ind.