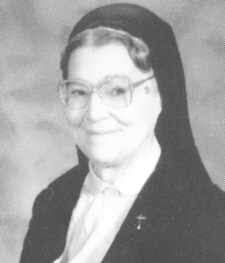 Sr. Frances Herumin P.H.J.C., 92, died Wednesday, January 10, 2007 in the St. Joseph Regional Medical Center, Plymouth Campus. Sr. Frances is a resident of Donaldson in the community of the Poor Handmaids of Jesus Christ.
She was born February 18, 1914 in Ashland, Wisconsin, to Roch and Josephine (Kowalewska) Herumin.
Sr. Frances first entered the convent June 25, 1934, and went on to profess her first vows June 24, 1936. She attended Ancilla College from 1936-1938. She served as a teacher from 1938-1988 in the following locations: St. Monica- Mishawaka, St. Patrick- Arcola, IN, Angel Guardian Orphanage-Chicago, St. Joseph-Mishawaka, Holy Cross-Wendelin, IL, St. Mark-Gary, IN, St. Lawrence-Sandoval, IL, St. John-Belleville, IL, St. Augustine-Chicago, Roosevelt U. Center-Chicago. After teaching she became a volunteer at the Guardian Angel Day Care-Chicago, and at St. Catherine Hospital-East Chicago, IN. In 1993 Sr. Frances retired at the Catherine Kasper Home –Donaldson, IN.
She is survived by her sister Cecilia Augustyniak, Greendale, WI, along with her nieces and nephews.
Visitation will be from 4:30-9:00 p.m. on Sunday January 14, 2007, with a wake service being held at 7:00 p.m. in the Catherine Kasper Life Center Chapel. The Mass of Christian Burial will be held in the chapel at 11 a.m. on Monday January 15, 2007. The Reverend Fr. Edward Konerman, S.J., will officiate.
Burial will follow in Mount Carmel Cemetery, Donaldson.