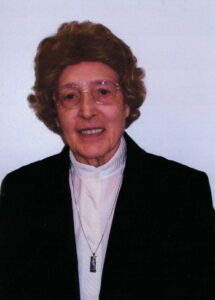 She was born in Trenton, Illinois to Henry George and Catherine Therese Schleper (Rakers) who preceded her in death along with her brothers Anthony, Alphonse, Herman, Albert, and George and her sisters Bernadine Emig, Josephine Rehkemper, Christine Hilmes and Sister Teresa Schleper, PHJC. She was the eighth child of ten children. She is survived by her niece, Sister Loretta Schleper, PHJC and 26 nieces and nephews.

Entering the Poor Handmaid Community on August 23, 1947 as Regina, she took the name Sister Georgine and professed her vows on June 25, 1950.

In 2011 Sister Georgine retired to the Catherine Kasper Home at The Center at Donaldson to be near her sister, Sister Teresa Schleper, PHJC.

Burial will take place in the Mt. Carmel Cemetery, Donaldson.

For those unable to attend in person, the Wake Service and Mass of Resurrection will be livestreamed at www.poorhandmaids.org/live.