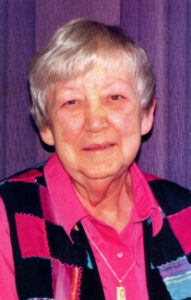 Sister Helen Irene Watkins (a.k.a. Sr. Nicholas), 80, passed away at 7:43 a.m. on Monday, December 29, 2014 in the Catherine Kasper Life Center on the campus of the Poor Handmaids of Jesus Christ, Donaldson.
Sister Helen is survived by her cousin Joyce Denning from Taylorville IL and many friends. She was preceded in death by her parents Elmer and Edith Watkins. She had no siblings.
Sister Helen was born in Taylorville, IL on September 21, 1934 to Elmer R. and Edith Jeannette (Kinnett) Watkins. She entered the Poor Handmaids of Jesus Christ congregation in Donaldson IN and professed her first vows on July 16, 1959. Sister received her nursing degree from St. John School of Nursing in Springfield, IL and her BSN degree from Loyola University, Chicago, IL. She graduated from Wayne State University, Detroit MI with her MSN. In 1981 she received her MHA in health and hospital administration from Xavier University, Cincinnati, OH. Sister Helen’s mission experience included: St. Anne’s Hospital and St. Elizabeth Hospital in Chicago,IL, Ancilla Home Health, Parish Nurse in Whiting IN, St. Catherine Hospital East Chicago, IN and also Wellness Nurse at the PHJC Ministry Center from 2005-2012. A high light of her ministry included her participation in 1967 in the Vietnam Assistance Program sponsored by the U.S. Catholic Conference of Bishops. The goal of this program was to advise and train Vietnam nurses. In 1999 Sr. Helen continued as Nurse Practitioner at Mathew 25 Health and Dental Clinic in Fort Wayne IN and her final ministry she served as the Wellness Nurse for the PHJC Sisters at the Motherhouse in Donaldson, IN. Sister retired to the Catherine Kasper Home in 2012 where she had previously served as the Administrator from 1988-1990.
Visitation for Sister Helen will be held on Tuesday, December 30th from 4:30 – 8 p.m. in the Catherine Kasper Chapel 9601 Union Road, Donaldson with a prayer service at 7 p.m. A Mass of Christian Burial will be held at 1 p.m. on Wednesday, December 31st in the Catherine Kasper Chapel with Fr. John Zemelko as the celebrant. Burial will follow in the Mt. Carmel Cemetery.
Memorials contributions to honor Sister Helen can be made to the Development Office of the Poor Handmaids of Jesus Christ, P.O. Box 1, Donaldson, IN 46513. www.poorhandmaids.org