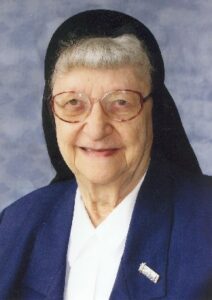 Sister Johnel Kunkel, PHJC, 97, died at 4:45 a.m. on Sunday, May 19, 2013 at the Catherine Kasper Life Center, Donaldson, Indiana. She was born Anna Marie Elizabeth in Carlyle, Illinois on April 26, 1916 to John and Elizabeth Rolfers Kunkel.
She received her education at St. Mary’s Elementary and High School in Carlyle. Both schools were operated by the Poor Handmaids of Jesus Christ, which is where Sister Johnel learned to love these Sisters. On December 4, 1942, Sister Johnel entered the Poor Handmaid community and made her first vows in 1945. She attended college at Ancilla College, Loyola University and she received her Bachelor of Science Degree from Alverno College. While teaching at St. Augustine, she completed her work for a Master’s Degree in Education on February 14, 1965.
Sister Johnel taught elementary education in schools in Quincy and Gary, Indiana, for a total of thirteen years. She taught high school at St. Augustine and Angel Guardian for six years, teaching business. In 1965, she became the Principal of St. Augustine High School, which lasted for nine years and six of those years she was superior of the convent of 28 sisters. In 1974 she was sent to Mater Dei High School as Registrar and then as Assistant Administrator for Academics. In 1988 she became Academic Dean at Ancilla College in Donaldson, Indiana. She was the Dean for seven years and then the Assistant to the President for eight years. On May 31, 2003, after 58 years of working in the community, Sister Johnel resigned that position and retired to the Motherhouse.
One of her greatest events in life as a Poor Handmaid of Jesus Christ was the pleasure of attending the Beatification of their foundress, Blessed Catherine Kasper in Rome at the Vatican. Over 100 of her sisters and about 150 lay people from America attended, including her sister, Sister Alice and her brother, Aloys and his wife, Betty.
Retirement was a whole new field in life for Sister Johnel. She had time for extra prayers, reflection, relaxation, and enjoying leisure time with her sister, Sister Alice, who is also at the Motherhouse.
She is survived by her sisters, Sister Alice, PHJC and Leona Feldmann, and numerous nieces and nephews.
Sister Johnel was preceded in death by her parents, and siblings: Aloys, Edward and Helen.
Visitation will be held in the Catherine Kasper Chapel, 9601 Union Road, in Donaldson on Tuesday, May 21, 2013 from 4:30 – 8:00 p.m. EDT. A Mass of Christian Burial will be celebrated in the Catherine Kasper Chapel, at 11:15 a.m. EDT on Wednesday.
Burial will follow in the Mt. Carmel Cemetery at Ancilla Domini.