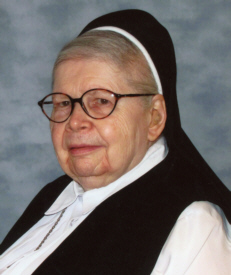 Just a one month shy of her 100th birthday and celebration of her 80th anniversary as a Sister of the Poor Handmaids of Jesus Christ, Sister Johnilda Mannhard (Marcella), PHJC died on Sunday, April 10, 2016 in the Catherine Kasper Home in Donaldson, Indiana.
As a small child, Sister Johnilda wanted to help children, especially the handicapped and those whom society deemed socially unacceptable. Her desire was to make people feel better. Sister Johnilda became a “mother” to many children at Angel Guardian Orphanage (AGO) in Chicago, serving there for 18 years. During a heartfelt speech at the 2015 AGO reunion, former AGO alumnus Joe Ellis said, “Sister Johnilda is the mother I never had and Angel Guardian was my home growing up. Without her efforts, I would have remained the cold, detached and lost child who showed up on Angel Guardian’s doorstep. I would have been unable to understand or value what was being offered to me here.” Because of Sister’s love and care, Joe and some of her other former “kids” called her the “Angel Guardian.” Her love for them was evidenced as she continued to write, call and visit with them. Sister is survived by one sister, Rita Kirstein, and several nieces and nephews. She was preceded in death by her brothers, Paul, Louis, Maurice and her sister Irene Zurliene. Sister Johnilda (Marcella), the oldest of six children, was born in Highland, Illinois to John and Mary (Luber) Mannhard. She attended St. Mary’s School in Trenton, Illinois where Poor Handmaids of Jesus Christ taught. She knew at a young age she wanted to be a religious Sister. Sister Johnilda attended Ancilla Domini High School in Donaldson, Indiana. She entered the Poor Handmaid of Jesus Christ Community as a postulant on September 2, 1933 and professed her first vows on June 25, 1936. She later graduated from DePaul University with a degree in Education. She began her elementary school teaching career in 1936 ministering in the classroom until 1956. Then Sister was missioned to Angel Guardian Orphanage in Chicago. Sister Johnilda officially retired to Catherine’s Cottage in Donaldson in 2006 and then the Catherine Kasper Home in 2015. Visitation will be held from 4:30 p.m.- 8:00 p.m. EDT at the Catherine Kasper Home on Thursday, April 14, 2016. A Prayer Service will be held the same evening at 7:00 p.m.
Mass of Resurrection will be celebrated in the Catherine Kasper Home Chapel on Friday, April 15, 2016 at 11:15 a.m. EDT.
Burial will follow in the Mt. Carmel Cemetery, Donaldson, Indiana.