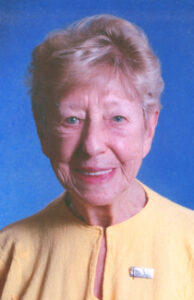 Sister Judian Breitenbach, PHJC, 82, died March 7, 2013 at the Catherine Kasper Life Center, Donaldson, Indiana. She was born Mary Gertrude Breitenbach to Aloysius John and Augusta Catherine (Daniel) Breitenbach in LaPorte, Indiana.
In 1950 she entered the Poor Handmaids of Jesus Christ congregation in Donaldson, Indiana and professed first vows on July 25, 1952.
A graduate of Ancilla College, Donaldson and St. Joseph Hospital School of Nursing, Fort Wayne, she earned her Bachelor of Science Degree in Nursing from Loyola University, Chicago and her Masters of Science Degree in Nursing and a Minor in Nursing Administration from Marquette University, Milwaukee.
For 25 years she was involved in the nursing profession eventually going into nursing administration and management in various PHJC hospitals. In 1979 she was appointed Administrator of the Catherine Kasper Home, Donaldson. In 1983 she was appointed chairperson of the Board of Directors for Ancilla Systems Incorporated, the Poor Handmaid hospital healthcare system. In 1990 she returned to Donaldson and was appointed the Administrator of the PHJC Ministry Center. After completing her ministry at the ministry center, she pursued her interest in holistic healing.
Sister Judian worked with the ideas of Deepak Chopra, MD and others, and became the Executive Director of the Healing Arts Center in Mishawaka, Indiana. She then became a consultant for Pastoral Care and Complementary Healing at LaPorte Hospital Health Services. In 2002 Sister Judian opened the Namaste Center where she was committed to the wellness and healing of individuals and an advocate for holistic healing. In addition to her ministry at Namaste Center, she was currently the chairperson of Sojourner Truth House Board in Gary, Indiana.
She was a member of the Rotary Club and was named a Paul Harris Fellow by the Rotary Foundation of Rotary International in 2012 and was named one of the interesting people in the Michiana Area by the Executive Journal.
Sister Judian is survived by her brothers, Brother Clarence Breitenbach, CSC of Notre Dame, Indiana and Leo (Jackie) Breitenbach of Valparaiso, Indiana and her sister, Lauretta (Kenneth) Hanson of LaPorte.
Visitation will be from 4:30 – 9:00 p.m. EDT Sunday, March 10, 2013 at the PHJC Ministry Center, Ancilla Domini Chapel, 9601 Union Road, Donaldson. Prayer service will be held at 7:00 p.m. EDT in the Chapel.
Funeral liturgy will be at 11:00 a.m. Monday, March 11, 2013 in the Ancilla Domini Chapel. Burial will follow in the Mt. Carmel Cemetery, Donaldson.
Memorial donations may be made to the Namaste Center, 1402 Lincolnway, LaPorte, IN 46350 or to the Poor Handmaids of Jesus Christ, P.O. Box 1, Donaldson, IN 46531.