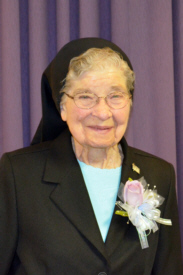 Sister Julienne, Smith, (Ardella Smith) PHJC, beloved teacher, principal, dean of girls and volunteer, passed away on November 12, 2015 at the Catherine Kasper Home in Donaldson, Indiana. Her love for the people she ministered to and with was mutual as reflected by the many who kept in contact with her over the years. Sister Julienne is survived by her nieces and nephews and many friends. She was born in Fort Wayne, IN, to Romer and Monica (Sorg) Smith who preceded her in death along with her brothers Joseph and Robert. She entered the Poor Handmaid of Jesus Christ Community as a postulant on December 7, 1940. She professed her first vows on June 25, 1943 and celebrated 70 years as a Poor Handmaid Sister in 2013. Sister Julienne graduated from Loyola University in Chicago, IL with a Bachelor and later a Master’s degree in education. Sister served for 27 years dedicated to elementary education as a teacher and principal. She ministered at St. Mary School Trenton, IL, Angel Guardian Orphanage, Chicago, IL, St. Boniface School in Edwardsville, IL, St. Ann School in Monterey, IN, St. Henry School in Chicago, IL and as Aspirant Director and part time teacher at Ancilla Domini High School in Donaldson, IN. She found the positive in her new assignments. In regards to her 10 years as Aspirant Director, later known as Dean of Girls at Ancilla Domini High School she reflects on the challenging appointment with teenage girls as “the challenge that became the most colorful and creative decade of my life, filled with fond memories.” From 1969 until 1980 Sister served in PHJC community ministry. She was Vocation Director and followed as Superior, Administrator at Convent Ancilla Domini in Donaldson, IN. For the next 21 years Sister enjoyed the special title of Sister Hostess at St. Joseph Medical Center in Fort Wayne, IN from 1992-2013. It was at St. Joe’s that Sister Julienne’s welcoming and gentle spirit touched many lives. Sister Julienne officially retired to Catherine’s Cottage and then to Catherine Kasper Home in 2015. Visitation will be held at the Catherine Kasper Home on Monday, November 16, 2015 beginning at 4:30 p.m. EST. A Prayer Service will be held the same evening 7:00 p.m. EST. A Funeral Liturgy will be held in the Ancilla Domini Chapel on Tuesday, November 17, 2015 at 11:15 a.m. EST. Burial will follow in the Mt. Carmel Cemetery, Donaldson, IN.