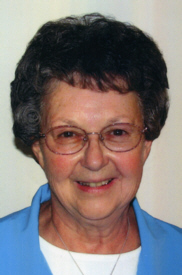 Sister Kathleen Morrissey (Joanne Margaret) PHJC, passed away November 17, 2015 at the Catherine Kasper Home, Donaldson, Indiana. Sister Kathleen was a caring person devoted to those around her – the children she taught, the elderly she cared for, and her Poor Handmaid of Jesus Christ religious community. On the occasion of her 60th anniversary she wrote, “As the oldest girl in family of 12, I learned to see what had to be done and accept responsibility with ease.”
Sister Kathleen is survived by her brothers Gerald, William, Thomas, and Dennis and her sisters Marion (John) Franke, Dolores (John) Connelly, Elaine (Leonard) Pameditis and Patricia Calahan. Sister loved her family and with them she enjoyed their times together. In her autobiography she stated that “one of her blessings of being from a big family was that she was invited to go on some special vacations.” She was surprised by her brother with a trip to Ireland giving her the opportunity to connect with her family in the ancestral home of her fraternal grandmother. Sister Kathleen was very proud of her Irish heritage and she could dance an energetic jig.
Sister Kathleen was born in Chicago, Illinois on February 18, 1936 to Emmet and Marion (Groener) who preceded her in death along with brothers John, Francis and James. On August 5, 1953 she entered the Poor Handmaids of Jesus Christ Congregation in Donaldson, Indiana and professed her first vows on July 15, 1956. Sister received her Bachelor of Education degree at DePaul University in Chicago, IL and her Master of Science degree in Physics and Mathematics at St. Louis University, St. Louis, MO.
Sister’s ministry included teaching at the elementary, high school and college levels. She served in Gary and Mishawaka, IN, and Chicago, IL. She was Dean of Students at Ancilla Domini High School (1985-1988) and professor of math at Ancilla College (1984-1991). After 35 years in teaching she felt the call to minister to older adults, so she pursued education in the Geriatric field and continued in a her new ministry as Administrator of Meredith Memorial Home in Belleville, IL (1994-1995) and later as the Director of Maria Center in Donaldson, IN (1999-2005). Sister Kathleen officially retired to the Catherine Kasper Home in 2013.
Visitation will be held on Sunday, November 22, 2015 at the Catherine Kasper Home from 4:30 p.m until 8:00 p.m (EST) A Prayer Service will be held at 7:00 p.m. (EST) Funeral Liturgy will be held in the Catherine Kasper Home Chapel at 11:15 a.m. on Monday, November 23, 2015 (EST) Burial will follow in the Mt. Carmel Cemetery, Donaldson, IN.