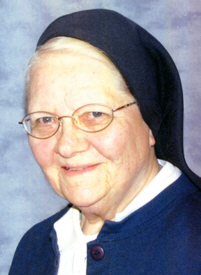 Sr. Kenneth (Shirley Mary) Scheibal, PHJC, age 87 passed away at 12:50 a.m. Monday, August 10, 2015 in Catherine Kasper Life Center at The Center at Donaldson.
Sister Kenneth is survived by her nephews, nieces and friends. She was preceded in death by her parents Joseph Scheibal and Christine (Kriger) Scheibal. She was also preceded in death by her ten siblings: seven brothers, Elmer, Lawrence, Raymond, Joseph, Alvin, Leonard and Kenneth and three sisters, Helen Bridgewater, Mildred Kolesa, and Lillian Long.
Sister Kenneth was born in Glen Carbon, IL on September 28, 1927. On August 25, 1947 she entered the Poor Handmaids of Jesus Christ Congregation in Donaldson, IN and professed her first vows on June 25, 1950. Sister received her Bachelor of Arts degree from Alverno College in Milwaukee, WI and her Master’s degree in Education from Loyola University in Chicago, IL. Her teaching career as an elementary teacher began in 1950 and ended in 1992. During this span of time she served in fourteen different Catholic Schools and was a principal during 15 of those years. She became a Certified Nursing Assistant in 1992 which was a great help to her as she felt called to accompany her aging brothers and sisters in their last years of life.
Her education as a CNA further provided skills for her years of infant and child care (1995 – 2003) at Nazareth Home in East Chicago, IN and St. John’s Daycare in Belleville, IL.
Sister retired to the Catherine Kasper Home in 2011.
Visitation in the Catherine Kasper Home Chapel will be held Thursday, August 13, 2015 from 4:30- 8:00 pm. A Prayer Service will be held Thursday, August 13, 2015 at 7:00 pm. Funeral Liturgy will be held Friday, August 14 at 11:15 a.m. in the Catherine Kasper Home Chapel
Burial will follow in the Mt. Carmel Cemetery, Donaldson, IN.