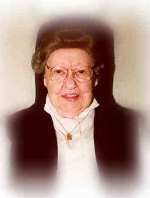 Sr. Lourdes Meyer, PHJC, 88, died at 11:50 p.m., on the millennium eve of Christ’s birth, Monday, December 24, 2001, in the Catherine Kasper Home, at the Community of the Poor Handmaids of Jesus Christ, Donaldson, Indiana. The daughter of William Joseph and Wilhelmine Kahroff Meyer, Sister Lourdes was born in Beckemeyer, Illinois, on January 22, 1913. She first entered the community on October 15, 1933, the same year she graduated from the School of Nursing. In March of the following year she completed her State Board exams and embarked on a 50 year career of service as a nurse. Sr. Lourdes worked in nearly every hospital department, including teaching in schools of nursing as well as State University. In 1965 Sister left the Community of the Poor Handmaids, then nearly twenty years later she re-dedicated her life to Christ and re-entered the novitiate on June 9, 1984 and again professed her vows on June 8, 1986. She continued her service to Christ, her Community and the people through her volunteer work at St. Joseph Hospital, Ft. Wayne until her retirement in May of 1996. Survivors include one sister, Mary Nerger of Park Ridge, Ill. along with dear nieces and nephews. Friends may call at the Catherine Kasper Home to celebrate the life of Sr. Lourdes on Wednesday, December 26, 2001, from 4:30 – 9 p.m. The Mass of Christian Burial will be held at 11 a.m. on Thursday, December 27, 2001 at the Catherine Kasper Chapel. Fr. Edward Konerman, S.J. and Fr. Anthony Gillespie will officiate. Interment will be in Mt. Carmel Cemetery, Donaldson, Indiana.