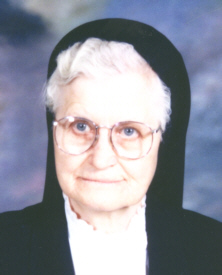 Sister Lucille Ardelean, PHJC, 94, died at 8:10 a.m. on Sunday, May 12, 2013 at the Catherine Kasper Life Center, Donaldson, Indiana. She was born Rose Ardelean in East Chicago, Indiana on October 13, 1918 to George and Mary (Estrovan) Ardelean.
On December 20, 1936 she entered the Poor Handmaids of Jesus Christ congregation in Donaldson, Indiana and professed first vows on June 25, 1939.
Sister Lucille had a Masters in Secondary Education and taught elementary and secondary education in Indiana, Illinois and Minnesota.
She is survived by her brothers, Theodore Ardelean of Sarasota, FL and George (Mary Lou) Ardelean of Huntsville, AL; sister-in-law, Anita Ardelean of Hammond, IN; and numerous nieces and nephews.
Sister Lucille was preceded in death by her parents, brothers, Victor and John, and sisters: Aurelia, Mary, Sr. Marlene, PHJC, Sr. Marilyn, PHJC, and Sr. Ann.
Visitation will be held in the Catherine Kasper Chapel, 9601 Union Road, in Donaldson on Wednesday, May 15, 2013 from 4:00 – 8:30 p.m. EDT, with a Prayer Service at 7:00 p.m. EDT. A Mass of Christian Burial will be celebrated in the Catherine Kasper Chapel, at 11:15 a.m. EDT on Thursday.
Burial will follow in the Mt. Carmel Cemetery at Ancilla Domini.