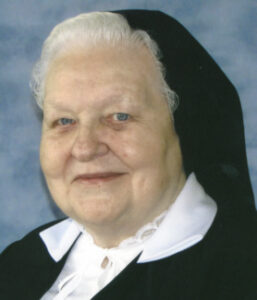 Sr. Mary Philomene Pawlik, PHJC, 90 died at 11:20 p. m. on Wednesday, December 25, 2013 at the Catherine Kasper Life Center, Donaldson, Indiana. She was born Philomene Pawlik in Knox, Indiana on July 6, 1923 to Hugo and Filomena (Romanovsky) Pawlik.
On June 6, 1942 she entered The Poor Handmaids of Jesus Christ congregation in Donaldson, Indiana and professed first vows on June 25, 1944.
Sister Philomene had a Master’s in Registered Nursing and Pastoral Care and also was a Pastoral Associate.
She is survived by her brothers, Alvin (Vi) Pawlik and Kemo (Rose) Pawlik and numerous nieces and nephews.
Sister Philomene was preceded in death by her parents and brothers, Hugo, Rudy, Ed, Joe, and sister’s Mary and Sophia.
Visitation will be held in the Catherine Kasper Chapel, 9601 Union Road, in Donaldson on Friday December 27, 2013 from 4:30 – 8:00 p.m. EDT. A Mass of Christian Burial will be celebrated on Saturday December 28, 2013 with Father John Zemelko in the Catherine Kasper Chapel at 11:15 a.m. EDT.
Burial will follow in the Mt. Carmel Cemetery at Ancilla Domini.