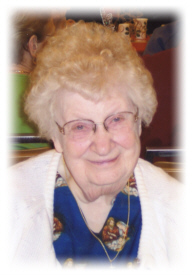 Sr. Mary Dolores Greifer, PHJC, 91, passed away this morning in the Catherine Kasper Life Center on her beloved campus of Ancilla College and the Community of the Poor Handmaids of Jesus Christ. A longtime favored instructor at the college – she touched many student’s lives and members of the Community. Her welcoming smile and outstretch arms will be dearly missed.
She was born Mary Dolores Greifer, in Quincy, Illinois on October 2, 1918, the daughter of George J. and Odelia F. (Besling) Greifer. She attended elementary school at St. John’s in Quincy; there she was taught by Poor Handmaids of Jesus Christ. She lovingly remembered every teacher and the impact they had on her learning and her future teaching.
She entered the convent on December 1, 1942 and professed her vows as Sr. Xavier on June 25, 1945. She went on to receive her Master’s Degree and in 1966 she returned to Donaldson and “Sister Mary D” as she was fondly known, set out to teach and create a strong English program when Ancilla College opened its doors that year to those seeking higher education.
Sister was renowned for her interest and care in helping students achieve personal, spiritual, and academic success, and her impact was not limited to the classroom. She created the Ancilla College Alumni Association as an effort to keep students connected with each other and the college after graduating.
Thirty-three years later, upon retiring from full-time teaching Sister Mary Dolores was bestowed the title Professor Emeritus and continued to lead the Alumni Association until 2002.
In the fall of ’09, Sister Mary Dolores was presented the Ancilla Award by College President Dr. Ron May. This award was initiated in 1975 as Ancilla College’s highest award and honors someone who has shown distinguished community service and who has been a loyal and dedicated supporter of Ancilla College. With that, Sister Mary D responded; “I’m so happy. It was so good to see so many friends, to be among these intellectual faces in this building made of bricks of learning.”
She is survived by a sister, Dorothy Owens of Quincy; sister-in-law, Bernie Greifer; and nieces and nephews: Eileen (Bill) Owens, Mark (Pat) Owens, Gayle (David) Bugger, Gay (John) Miller, Curt (Marcia) Greifer, Cliff (Lynn) Greifer, a host of former students and friends, including her dear friend Dorothy Weber.
Friends and family are invited to visitation for Sister Mary Dolores on Sunday, February 14th in the Catherine Kasper Home Chapel from 3 – 8 p.m. where a wake service will take place at 7 p.m. The Mass of Resurrection will be held in the Catherine Kasper Chapel at 11 a.m. Monday, February 15th with celebrant Fr. Ed Konnerman. Burial will follow in Mt. Carmel Cemetery, on the grounds of Ancilla Domini.
Glorious Title… Handmaid of the Lord!
In lieu of flowers, contributions may be made to Poor Handmaids Development Fund or Sister Mary Dolores Alumni Scholarship, c/o Ancilla College, 9601 Union Road, Donaldson, Indiana 46513.