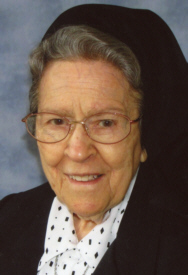 Sister Maxine Peppenhorst PHJC, formerly known as Sister Alicia, passed away November 18, 2015 at the Catherine Kasper Home, Donaldson, Indiana. Sister Maxine’s gentle joyful spirit touched the hearts of her Sisters and the Staff of Catherine Kasper Home. She will be especially remembered for her nightly blessings for each resident as she walked from room to room at Catherine Kasper Home (CKH). She was frequently heard by CKH staff and residents saying, “God has been very good to me,” and she shared God’s love with everyone she met. She expressed on several occasions that her greatest blessing and her greatest gift from God was her religious life – being a Poor Handmaid of Jesus Christ.
Sister Maxine is survived by her brother in law, Leroy Raeber, first cousin, Virgil Kannall, other cousins and many special friends.
Sister Maxine was born in Beckemeyer, IL to Edward and Frances (Kannall) Peppenhorst who preceded her in death along with her sister, Virginia. She attended St. Anthony Grade School in Beckemeyer, IL and three years of high school in Beckemeyer IL. She entered the Poor Handmaid of Jesus Christ Community as a postulant on September 12, 1936 and professed her first vows on June 25, 1939. Sister Maxine received her Bachelor of Science degree from Loyola University and her Masters in Education from St. Francis College in Fort Wayne IN. Sister was an avid reader and loved to discuss history and politics. Sister served as teacher from 1939 until 1989 in the Dioceses of Gary IN, Belleville IL and Fort Wayne-South Bend IN. After she celebrated her 50th Jubilee she continued to teach religion classes at St. Mary’s in Trenton, IL. Sister Maxine officially retired to the Catherine Kasper Home (CKH) in 2000. Visitation will be held on Monday, November 23, 2015 at the Catherine Kasper Home Chapel from 4:30 p.m. until 8:00 p.m. (EST) A Prayer Service will be held that same evening at 7:00 p.m. (EST) Funeral Liturgy will be held in the Catherine Kasper Home Chapel on Tuesday, November 24, 2015 at 11:15 a.m. (EST) Burial will follow in the Mt. Carmel Cemetery, Donaldson, IN.