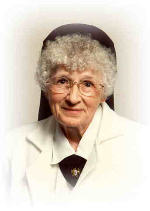 Sister Norine Kromm, PHJC, 89, died at 8:20 a.m. on Monday, January 21, 2002, in the Catherine Kasper Home, at the Community of the Poor Handmaids of Jesus Christ, Donaldson, Ind. The daughter of Frank H. and Lena McKenzie Kromm, Sr., Sister Norine was born in Fort Wayne, Ind., on September 7, 1912. She entered the convent on June 15, 1932 and professed her first vows on June 25, 1934. Sr. recieved a Bachelor’s of Science Degree in Medical Technology from St. Louis University , St. Louis, MO., in 1946. She had previously taken Nurses’s training at St. Mary Hospital in East St. Louis, ILL., in 1933. Sr. served the ministry of Health Care as a nurse in various hospitals in Wisconsin and Illinois. She also spent 36 years as a lab supervisor at hospitals in Illinois and Minnesota, and also spent 12 years doing volunteer work at St. Anne and St. Elizabeth Hospitals in Chicago, ILL., until her retirement to the Catherine Kasper Home in 1994. Sr. Norine is survived by a twin sister, Geraldine Hinton of Westchester, ILL. and several nieces and nephews. Friends may call at the Catherine Kasper Home to celebrate her life, on Wednesday, January 23, 2002, from 4:30 to 9:00 p.m. The Mass of Christian Burial will be held at 11 a.m. on Thursday, January 24, 2002 at the Catherine Kasper Chapel. Fathers Edward Konerman, S.J. and Anthony Gillespie will officiate. Interment will be in Mt. Carmel Cemetery, Donaldson, Indiana.