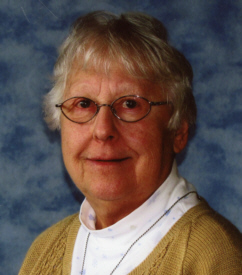 Sister Patricia Belting (formerly Sister Louise) a Poor Handmaid of Jesus Christ died on January 5, 2016 in the Catherine Kasper Home in Donaldson, Indiana. Sister Patricia is survived by nieces, Karen(Bill) Peak, and Mary Jones and nephews, Kurt Belting, Joseph Belting, Michael Belting, Mark (Terri) Huffman, Dan (Linda) Huffman, Chris (Ann) Belting, William (Becky) Belting.
Sister Patricia’s dedication and love for her family and the PHJC congregation was evident. In her jubilee reflection, she writes, “As I reflect on my life as a PHJC, the word ‘gift’ comes to my mind. The call to religious life, the PHJC community in particular, continues to be an experience of change, support and growth in all areas of my life, body, mind and spirit. I see this as a journey to wholeness until it is complete in the Godhead.”
A photo history collage of her family hangs in her bedroom where she would gladly reminisce with visitors about her family. This was a cherished gift she received on her 80th birthday from her niece. Sister Patricia was born in Mishawaka, Indiana on February 24, 1932 to John and Agnes (Myers) Belting who preceded her in death along with her brother, John (Mary) Belting and her sister Maris (Edwin) Huffman. She attended St. Joseph Grade School in Mishawaka and one year at Mishawaka High School then completed her high school education at Ancilla High School in Donaldson. On June 25, 1951 she entered the Poor Handmaids of Jesus Christ Congregation and professed her first vows on June 25, 1953. Sister received her Bachelor of Education degree at Alverno College in Milwaukee, Wisconsin and her Masters degree in Education at St. Francis College in Fort Wayne, Indiana. Sister served as a teacher from 1953 until 1975 in Chicago and Edwardsville, Illinois and Black Oak and Hammond in Indiana. In addition to the elementary grades, she was a Montessori teacher in Fort Wayne. Sister Pat commented that, “she thought she would be a teacher until she died, but she was mistaken and she never chose any career. It just happened.” In 1986 Sister Pat earned her Doctorate of Ministry in Pastoral Counseling from Garret Theological Seminary. The learned skills were an asset to her as a member of the PHJC Novitiate team in Cincinnati, Ohio where she also served as Spiritual Counselor. She also served as a Pastoral Psychotherapist and Transpersonal Therapist at the Samaritan Center in Elkhart, Indiana and the Healing Arts Center in Mishawaka. From 1998 until 2009 Sister Patricia served as a Counselor and Spiritual Director in various areas in the Fort Wayne/South Bend Diocese. Sister Patricia officially retired to the Catherine Kasper Home in 2009.
Visitation will be held at the Catherine Kasper Home on Thursday, January 7, 2016 starting at 4:30 p.m. A Prayer Service will be held the same evening at 7:00 p.m. EST. Funeral Liturgy will be held in the Catherine Kasper Home Chapel on Friday, January 8, 2016 at 11:15 a.m. Burial will follow in the Mt. Carmel Cemetery, Donaldson, Indiana.