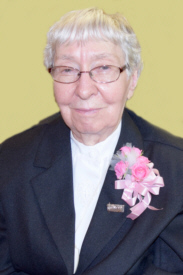 Sister Richilde Dettmer (Pauline) PHJC passed away on January 22, 2017 at the Catherine Kasper Home in Donaldson, Indiana. Sister Richilde was born on March 23, 1919 in Hartington, Nebraska to George and Theresa (Frigge) Dettmer who preceded her in death along with her step-mother, Rosa (Alfes) and seven brothers: Father Aloysius, Ted, Clement, Edmund, John, Leonard and Father Alfred. Leaving Nebraska, the family moved to Donaldson, Indiana where her father and brother found work with the Poor Handmaid Sisters. She started work at the hospital in LaPorte, Indiana, which was owned by the Poor Handmaids. The Sisters at the hospital impressed her with their simple living and prayerful life so much so, that she decided to join the congregation.
She entered the Poor Handmaids of Jesus Christ Community as a postulant on December 23, 1937 and professed her first vows on June 25, 1940.
Sister Richilde studied Liberal Arts at Ancilla College, Donaldson and Chicago City Junior College; Nursing at St. Francis College, Joliet, Illinois; and Sociology at Loyola University, Chicago. Her desire to travel and experience new cultures led her to volunteer to care for Cambodian refugees in Thailand in the 1970s. She stated in her 2015 jubilee reflection, â€œMy experience in Thailand opened my eyes to a greater awareness of poverty in the world and my need to support those who work there with my prayers.â€
Sister Richildeâ€™s 42 years of loving care as a nurse took her to many ministries. She began her nursing career in 1943 at St. Joseph Hospital, Fort Wayne, Indiana. She also ministered at St. Elizabeth Hospital, Chicago; St. Joseph Hospital, Ashland, Wisconsin; St. Mary Home, Carlyle, Illinois; St. Vincent Villa, Fort Wayne; St. Vincent Home, Quincy, Illinois; St. Mary Hospital, East St. Louis, Illinois; Carlyle Shelticenter, Carlyle, Illinois; Catherine Kasper Home, Donaldson; Meredith Memorial Home, Belleville, Illinois; and Beacon House, Burlington, Iowa. For several years she provided nursing care to the migrant workers near Plymouth, Indiana and in San Juan, Texas. She retired to the Catherine Kasper Home in 1998. Visitation will be held at the Catherine Kasper Home on Wednesday, January 25, 2017 beginning at 4:00 p.m. (EST) A Wake Service will be held the same evening at 4:30 p.m. EST.
Funeral Liturgy will be held in the Catherine Kasper Home Chapel on Thursday, January 26, 2017 at 11:15 a.m. (EST) Burial will follow in the Mt. Carmel Cemetery, Donaldson, Indiana.
Memorial contributions may be made to the Poor Handmaids of Jesus Christ, PO Box 1, Donaldson 46513.