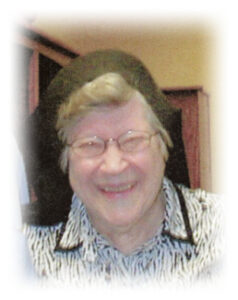 Sister S. Leandra Welling a member of the Poor Handmaids of Jesus Christ, Donaldson, passed into the arms of her Savior at 6:24 p.m. Wednesday, March 21st in the Catherine Kasper Life Center.
She was born in Trenton, Illinois on November 26, 1925 the daughter of Henry and Christine Ann (Markus) Welling.
On September 8th, 1943 she entered the Ancilla Domini Convent and professed her vows on June 25th, 1946. Having attained a Bachelor’s Degree in Child Care, that became her ministry in life.
Sr. Leandra is survived by two sisters; Eloise Seger of Trenton, IL and Ann Bolk of Carlyle, IL along with many nieces and nephews.
She was preceded in death by a sister, Elvera Vaninger and a brother, Louis Welling.
Visitation will be held at 4:30 p.m. on Friday, March 23rd in the Chapel of Catherine Kasper Life Center, Donaldson where a Mass of Christian Burial will be at 11 a.m. on Saturday, March 24th with celebrant, Fr. Michael Winkowski.
Burial will follow in the Mt. Carmel Cemetery on the grounds of Ancilla Domini.