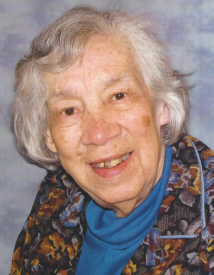 Sister Stephen Brueggeman (Frances Josephine), PHJC, died on Sunday June 15, 2014 at 4:25 p.m. in the Catherine Kasper Home in Donaldson, IN.
Sister Stephen is survived by her loving sisters, Rita Howard from Kensington, CA; Rosemary Wallace from Pembroke Pines, FL and by her brothers, James Brueggeman from Florida and Larry Brueggeman from San Mateo, CA. She was preceeded in death by her siblings Norbert and Anita.
Sister Stephen was born in Centralia, IL on April 12, 1922 to Anthony and Helen C. (Dunkel) Brueggeman. On December 21, 1944 she entered the Poor Handmaids of Jesus Christ congregation in Donaldson, Indiana and professed her first vows on June 24, 1947. Sister Stephen received her B.S.N.ED. (Cum laude) and her Masters in Education from Loyola University. Sister served as a staff nurse in Obstetrics as well as nurse educator (her favorite job) and hospital administrator at the former St. Anne’s Hospital in Chicago, IL. She also served as Hospital administrator at St. Catherine Hospital in East Chicago, IN. Sr Stephen held various positions in the Illinois Nurses’ Association and on many boards and committees. Included among these were the Comprehensive Planning Agency of Lake County, IN; Board of Health of East Chicago, IN; Mission Services Advisory Committee of the Catholic Health Association; and the Chicago Archdiocesan Ethics Commission. She received the prestigious Sister Mary Concilia Moran Award from the Catholic Health Association.
She ministered as Provincial Superior of the Poor Handmaids of Jesus Christ Community from 1979-1985 and then served as vice president of Mission Effectiveness for Ancilla Systems in Hobart, IN. During her later years she served the PHJC community by researching the history of the American province of Poor Handmaids of Jesus Christ. In addition, Sr. Stephen volunteered at the Nazareth home in East Chicago, IN, rocking the babies. Sister “officially” retired to the Catherine Kasper Home in June 2012. She will be remembered for her call for collaboration among Catholic health care providers, and for the vision, creativity, and discerning spirit she brought to all aspects of her life.
Visitation will be from 4:30 – 8:00 p.m. EDT Wednesday, June 18, 2014 at the Catherine Kasper Chapel, 9601 Union Road, Donaldson. Prayer service will be held at 7:00 p.m. EDT in the Chapel. Funeral liturgy will be at 11:15 a.m. EDT Thursday, June 19, 2014 in the Catherine Kasper Chapel. Burial will follow in the Mt. Carmel Cemetery, Donaldson.
Memorial contributions honoring Sr. Stephen can be made to the Development Office of the Poor Handmaids of Jesus Christ. P.O. Box 1, Donaldson, IN 46513.