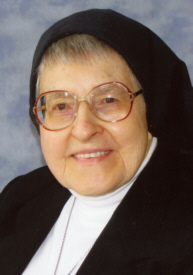 After 54 years of ministering in food service, cooking baking and supervising Sister Teresa Schleper, PHJC passed with peace and grace on November 11, 2015 in the Catherine Kasper Home in Donaldson, IN. “God is GOOD. Prayer is powerful and I am grateful to God for my family and the Poor Handmaids and for so many blessings,” wrote Sister Teresa on her 60th jubilee as a Poor Handmaid of Jesus Christ.
Sister Teresa is survived by one sister, Sister Georgine Schleper PHJC, one brother, Albert Schleper, a niece, Sister Loretta Schleper PHJC and several nieces and nephews. She was preceded in death by her brothers and sisters: Anthony (Josie) Schleper, Bernadine (Oliver) Emig, Josephine (Ed) Rehkemper, Alphonse (Evelyn) Schleper, Christine (Arnold) Hilmes, Herman Schleper, and George Schleper.
Sister Teresa was born in Trenton, IL to Henry and Catherine (Rakers) Schleper the seventh child in a family of 10 children. She attended 1st to 3rd grades in a small country school and the next 4 years at St. Mary’s School in Trenton, IL. She entered the Poor Handmaid of Jesus Christ Community as a postulant on June 25, 1946. She professed her first vows on June 25, 1948. Sister Teresa ministered primarily in food service, cooking, baking and supervising. She ministered in Indiana at St. Catherine Hospital East Chicago, St. Vincent Villa Fort Wayne, St. Patrick Convent Arcola, Convent Ancilla Domini in Donaldson, and Bishop Dwenger in Fort Wayne. In Illinois she ministered at St. Elizabeth Hospital and St. Anne’s Hospital in Chicago.
Sister Teresa officially retired to the Catherine Kasper Home in 2002. She enjoyed working on sewing projects and quilts in the sewing room at Catherine Kasper Home and was known especially for her aroma therapy heating pads. Sister will be remembered for providing thank you baskets for individuals who were generous with their time and talents. Sister Teresa brought much joy with her positive and loving attitude to all who lived and ministered at Catherine Kasper Home.
Visitation will be held from 4:30-8:00 pm EST at the Catherine Kasper Home Chapel on Sunday, November 15, 2015. A Prayer Service will be held the same evening 7:00 p.m. EST. Mass of Resurrection will be celebrated in the Catherine Kasper Home Chapel on Monday, November 16, 2015 at 11:15 a.m. EST. Burial will follow in the Mt. Carmel Cemetery, Donaldson, IN.