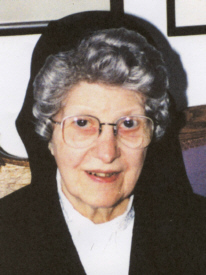 Sister M. Vivian Brand, PHJC, (Sedonia Brand), 96, died of natural causes on Sunday, November 17, 2013 while residing in the Catherine Kasper Life Center, Donaldson.
Josephine (Foppe) and Henry raised eight children: Lowell, Irene, Alvin, Georgian, Sedonia, Vivian, Henry Louis and Ann.
Born in Germantown, Illinois on April 11, 1917, Sedonia grew in a home full of love, laughter, prayer and hard work with a deep appreciation of one another and all God’s creation. Sister Vivian, then known as Sedonia enjoyed the love of her parents and the teasing and fun of brothers and sisters.
Sister Vivian entered the Poor Handmaids of Jesus Christ on June 25, 1935 and took her final vows on June 25, 1938. Her life as a Poor Handmaid was spent in service to others not only in education, but beautifying the grounds around the college with her flowerbeds and then placing them in wonderful table arrangements.
In 1946 as a teacher, she received her B.A. in History/English/Latin from Rosary University, Lake Forest, IL. In 1955 sister received her Master’s Degree in Modern Europe from Notre Dame University, South Bend, IN. In 1963 sister received her PH.D in American History/Political Science from St. Louis University.
Sister Vivian touched the lives of many children and families when she taught in Edwardsville, IL, Chicago, IL and from 1946-2005 in Ancilla High School as teacher and Dean of Girls then to Ancilla College as Teacher and Dean. Before retiring in 2005 to the Catherine Kasper Home, sister also volunteered in the College Library.
Sister Vivian is survived by her sisters, Ann Jackson of St. Louis, MO and Vivian Coser of St. Louis.
She was preceded in death by her parents, her brothers, Lowell, Alvin and Henry Louis, and her sisters, Irene and Georgian.
Visitation will be held in the Catherine Kasper Chapel, 9601 Union Road, in Donaldson on Tuesday, November 19, 2013 from 4:30 – 8:30 p.m. EDT, with a Prayer Service at 7:00 p.m. EDT. A Mass of Christian Burial will be celebrated in the Catherine Kasper Chapel, at 11:15 a.m. EDT on Wednesday.
Burial will follow in the Mt. Carmel Cemetery at Ancilla Domini.
Memorial contributions can be made to the Poor Handmaids of Jesus Christ Ministries, 9601 Union Road, Donaldson, Indiana 46513